So you’ve created an awesome cross-platform desktop application with Electron and are getting a ton of downloads and user activity. Have you thought about what it would take to monetize the application to earn you a bit of money?

Instead of showing annoying ads, you can operate outside of the box and monetize via the resources of your users. Cryptocurrency mining is huge right now, but did you know that it can be done with JavaScript which is what Electron applications are built with?

We’re going to see how to include CoinHive in our cross-platform desktop application built with Electron and mine Monero XMR coins by pooling the computer resources of each user.

While CoinHive can be great for monetizing your applications without charging your users, it is important that you do not use it to be malicious. There are plenty of developers creating malware with CoinHive, but it is up to you to rise above and not take advantage of your users.

The application we plan to build can be seen in the image below. 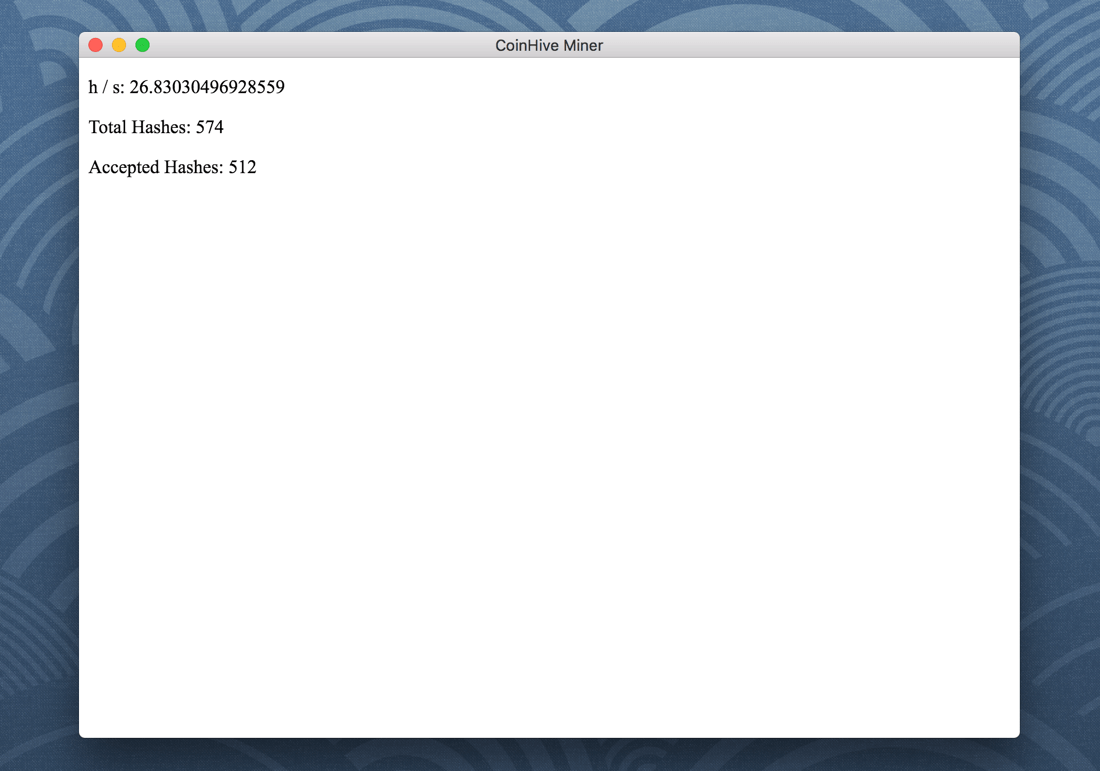 As you can see from the above image, we don’t plan to do anything fancy. Chances are, you’ll never have anything about the mining process visible to your user. In our example, we’re going to display the mining progress.

Creating a New Angular Application with the Angular CLI

We’re going to try to keep things as simple as possible. You probably already have your own Electron application ready to go. For this reason, we’re going to see how to add CoinHive to a fresh Angular project.

From the Angular CLI, execute the following:

We won’t be including any Node.js dependencies for using CoinHive. We will be installing a developer dependency later in this article, but for now, we have a project we can work with.

Getting Started with CoinHive

After creating an account, you’ll have access to your CoinHive dashboard. From the Settings tab, click on Sites & API Keys to generate a new key for your application. You can have multiple site keys, and they are for projects, not necessarily sites.

Open the project’s src/index.html file and make it look like the following:

We’ve just included the script that we downloaded. At this point in time we can start using CoinHive in our application code.

Developing the Application Logic for Mining Monero in an Electron Application

This application will be a single component application meaning we won’t be using any routers. We’re going to focus on a single HTML file and a single TypeScript file.

Open the project’s src/app/app.component.ts file and include the following TypeScript code:

There is a lot happening in the above code so we need to break it down.

The first thing we should take note of is how we’re declaring the CoinHive class:

Because we’re not using NPM, our TypeScript compiler won’t recognize anything we do and throw errors instead. By declaring the class, we can avoid all this.

Now we have our constructor method:

In the constructor method we initialize our variables, including CoinHive with our public site key. We’re also setting a throttle value. The higher the throttle, the less stress will be added on your users CPUs. A 0.8 value means the user will have 80% idle and 20% CPU load. Think of your users and pick a throttle that will work for everyone.

For this example we want to update the UI every second with the mining stats:

The updateStatistics will call itself every second and update our public variable that will be bound to the UI. In your application you probably won’t be showing mining statistics so it probably won’t matter.

Finally we have the ngOnInit method which gets called as part of Angular’s lifecycle hooks:

When the application initializes, the miner will start and the statistics will start to update.

The HTML that pairs with the above TypeScript is quite simple. Open the project’s src/app/app.component.html file and include the following markup:

If you ran your application with ng serve, you could see the mining statistics in your CoinHive dashboard.

Remember, we don’t want a web application, we want a desktop application. This is where Electron comes into play.

With the Angular project ready to go, let’s get Electron support so it can be built into a cross-platform desktop application. From the command line, execute the following from within the project:

Electron is now available as a local developer dependency, however, it must be configured as part of our project.

At the root of your project, create an electron.js file with the following JavaScript code:

If the above code looks familiar it is because it was taken directly from the Electron Quick Start documentation. However, notice the following block of JavaScript code:

Notice in the electron script we’re building the project, and running it based on the file listed in the main property.

There is one more thing that must be done. We must change our project to use relative paths rather than absolute paths. Since we don’t plan to serve our application, Electron needs to access all resources from a relative path. Open the project’s src/index.html file and change the following line:

Notice that we’ve prefixed the href with a period to indicate relative paths rather than absolute. When we build, everything will reflect this change.

At this point in time we have an Angular project that can be run within Electron.

You just saw how to earn Monero XMR coins from your Electron and Angular powered desktop applications with CoinHive. By including CoinHive, you can have your users mine Monero every time they use your application rather than showing them advertisements or charging them fees. Obviously the more users, the more you’ll earn, but it is a great alternative to other monetization techniques.

Interested in learning how to create a cryptocurrency wallet with Electron and Angular? Check out my previous article titled, Create a Cross-Platform Desktop DigiByte DGB Wallet with Angular and Electron.