Creating a Real Time Chat Application with Ionic and Socket.io

We’re going to take a look at what it takes to create a chat application using Socket.io and the mobile web framework Ionic 2.

Here are some prerequisites that must be accounted for:

To make our lives easy, we’re going to clone the project I created previously from GitHub. Download this project or execute the following from a Terminal (Mac and Linux) or Command Prompt (Windows):

The Node.js code is valuable to us for this particular tutorial, not so much the Angular TypeScript code.

Don’t forget to install all the Node.js dependencies after you download the project. They can be installed by executing the following:

We also need to make one change to the Node.js code. Since I’m going to be running everything from my local computer we’re going to have a few different ports in use. This will create cross origin resource sharing (CORS) issues that we need to correct. In the GitHub project, open the app.js file and add the following above the routes section:

Now CORS is accepted in our Node.js locally running server.

You will need Couchbase Server for this application because the Node.js project from GitHub uses it. Instructions for configuring can be found in the previous tutorial.

We’re now going to create a fresh Ionic 2 Android and iOS project. From the Command Prompt (Windows) or Terminal (Mac and Linux), execute the following:

A few important things to note here. You need to be using the Ionic CLI that supports Ionic 2 applications. You must also be using a Mac if you wish to add and build for the iOS platform.

We’re going to spend most of our time in two particular Ionic project files, however, we first need to download the Socket.io client library and include it in our project. Download the latest client release. I’m using version 1.2.0. Copy the socket.io-1.2.0.js file downloaded to your Ionic project’s www/js directory. Next open the www/index.html file and include this line:

It needs to be added before the other scripts. Now we can get to the bulk of our development.

Starting with the UI file, open app/pages/home/home.html and change the code to look like the following:

There is a lot missing as of right now, but here is the breakdown starting from the bottom.

We add an <ion-footer-bar> because it is the easiest way to create a sticky footer in Ionic Framework. We need a sticky footer because we want our chat input box and send button to always remain at the bottom. The input field is tied to the chatBox model which is passed when the button calls the send() function. Both the send() function and chatBox model will be seen again in the logic file.

Moving up to our <ion-list> we can see we’re looping through a messages array. Each message will represent something received from Socket.io. It too will be defined in our logic file.

Now let’s jump into our logic file. Open your project’s app/pages/home/home.js file and change the code to look like the following:

There is a lot going on in the above, but if you read my Socket.io with the CEAN stack tutorial, not much of it is new. Let’s break it down anyways though.

Like with the previous tutorial, we’re going to be storing our chat history in a Couchbase Server. Our Node.js application has a single endpoint for fetching all chat messages. This endpoint is consumed over HTTP. The NgZone was included because it helps with checking for changes. When Angular is out of beta, this may no longer be necessary.

This is the host of the Node.js Socket.io server. For me, it is running locally, but yours might not be.

When the page loads, we immediately consume the fetch endpoint to catch us up with the rest of the group. We wouldn’t want to join and miss out on all the conversations.

This is where things become slightly different than the CEAN tutorial:

When messages are received we push them into the array from within the this.zone.run method. Currently, without this, the messages may not update on the screen.

Testing Communication Between the Socket.io Client and Server

First we want to start the Node.js and Socket.io server. Using your Command Prompt or Terminal, from within the GitHub project, execute the following:

Remember your Couchbase installation must be running and configured as seen in the previous tutorial, otherwise running may fail.

With the server running, you can now build and run for one of the mobile platforms.

For iOS you can do the following, provided you’re on a Mac:

Or for Android you can execute the following:

This of course needs to be run in a separate Terminal or Command Prompt that is within your Ionic 2 project. 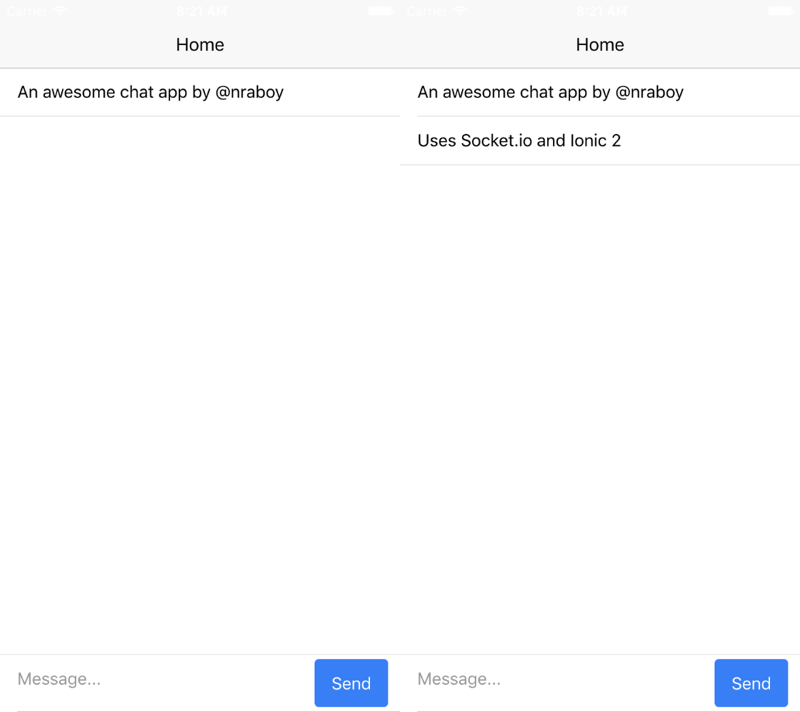 This project can be downloaded in full on GitHub.