Earn Extra Money As A Programmer With A Developer Blog

If you’ve been a long time subscriber to The Polyglot Developer, you’ll know that I use the blog as a way to document what I learn on a day to day basis. I’ll never remember what I did six months ago unless I document the steps to reproduce it later.

We’re going see a few things that will get you started with earning money through a programming blog.

Building a blog is going to require some kind of CMS or blogging platform. You can use hosted solutions like those found at wordpress.com or blogger.com, but they are limited in what you can accomplish or customize.

You’re a developer, so hosting your own blogging platform won’t be so difficult.

When I first started, I was using WordPress on Digital Ocean. For clarity, wordpress.com is the hosted version of WordPress while wordpress.org is the self-hosted. I’ve since switched to static website generation with Hugo to cut costs, but if costs are becoming an issue, that is a good problem to have.

If you choose WordPress, consider installing the following plugins:

There are plenty of other WordPress plugins to install, but the list above will get you nice syntax highlighting for your code snippets, great performance, and recommendations to boost your footprint online.

You’re going to want a solid theme to represent your work. My personal opinion is to find a theme that puts emphasis on your code and writing, and less on the aesthetics. You and your audience will benefit from the content if it is readable.

I was personally using Sparkling by Colorlib as my WordPress theme.

Ultimately it is up to you to figure out how you want to host your blog and what you want it to look like. There are plenty of options like Ghost, WordPress, Hugo, Jekyll, and so many more. Your concern should be whether or not people can read it properly.

Brand the Blog for Today, Tomorrow and Yesterday, Not Just Today

When you want to start writing content, you might want to brand it based upon what you’re currently doing. For example, if you’re currently doing a lot of Ember.js development, you might consider branding your blog as Some Ember Blog and buying the domain someemberblog.com. The problem with this is, what happens when Ember.js is no longer relevant (it isn’t) or you’ve moved on to a new technology? Now you’re stuck with a blog on Ember.js that no one wants to read.

Branding your blog to be timeless isn’t the only thing to consider. When I first started blogging, I had been using Nic Raboy’s Code Blog at blog.nraboy.com. There are a few problems with this:

Make sure you pick a name and domain that doesn’t have some alternative meaning.

Write content that you’ll benefit from. In other words, blog for you.

Like I mention all the time, I started writing because I was learning new development technologies and needed a way to remember what I had spent hours trying to figure out.

If you’re consistent with writing and you’ve got enough content built up, people will discover you online. Don’t try to write content with the intention of making money because your content will suffer. Instead write content that you’d read and the money will follow.

Monetize from Advertising with Google Adsense or Sponsorship

When you’ve got some content under your belt and you’ve got the blogging thing down, you can worry about monetizing what you’ve done.

Google Adsense is a great way to get started with monetization because it is easy to be accepted into the program, and any cost per impression (CPM) and cost per click (CPC) income that comes after is passive income.

Take my Google Adsense revenue from 2016 for example. 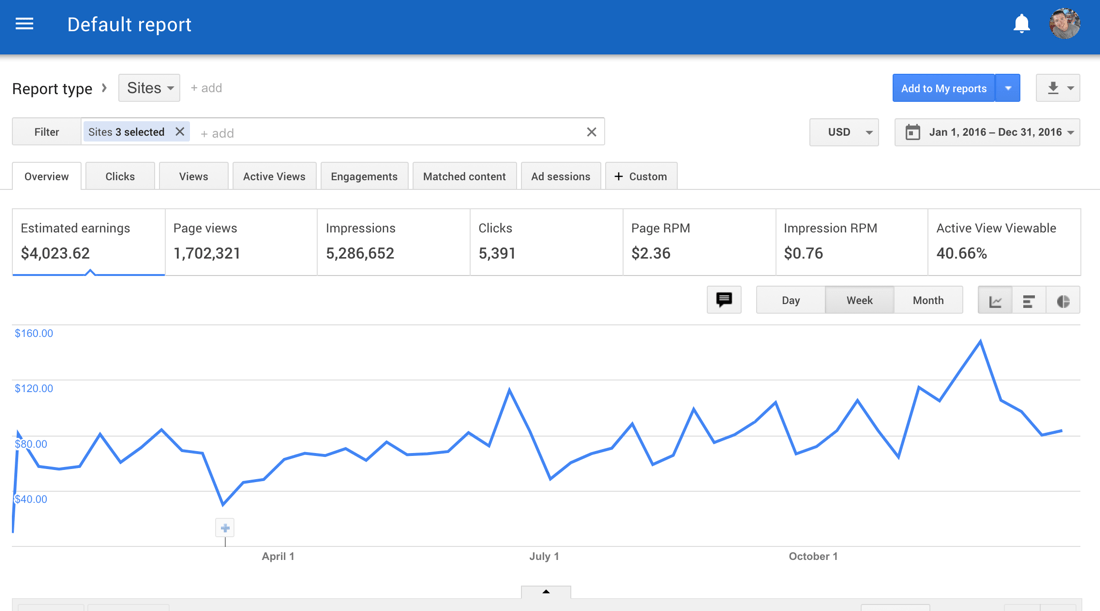 That is ~$4,000 from documenting my work via the blog. Could I live off that money for a year? Probably not, but it is extra money that I’m earning as a developer.

Adsense is a slow way to make money from a programming blog. It takes a lot of posts and a lot of traffic to convert into actual spendable income. Now that you’re writing quality developer content, companies with similar interests might be interested in using your traffic and content to promote their brand. Let this be an opportunity to get sponsorship income.

You could offer sponsored guest content on your blog, special advertising opportunities, or anything else. Sponsorship is one of the primary sources of income on The Polyglot Developer, even more so than Google Adsense.

To learn about my sponsorship opportunities, check out options here. If you’d like to see my 2016 year at a glance, check out the end of the year summary that I had released last year.

Promote the Other Things You Do

Consider publishing a paid course on some subject and promoting it via your blog.

Did you know that I’ve released several courses? I list them here, but I’ve also released an article for each course the day it went live.

This same strategy can be applied to eBooks, webinars, or any other content that carries a price tag.

If you’re interested in making some extra money as a programmer, you should definitely consider starting a development blog. Not only will you benefit from it, but you will grow a community of developers that will also benefit from the content that you produce. The community that you build could even help you to become a better software engineer.

Making money writing software or making money programming for your day job isn’t the only way you can put your skills to use.