When building a web application, I personally find file uploads to be the most complicated part of the job. For example, how do you accept the files, and what do you do with them after you’ve received them in the request?

Not too long ago I wrote about accepting file uploads in Node.js sent via Angular. In this example I was using Express and the Multer middleware. What if you’re interested in using one of the more modern Node.js frameworks instead of Express?

This time around we’re going to explore processing file uploads with Hapi and Node.js.

The above command will initialize a new project by creating a package.json file within your directory. With the project initialized, we can install the appropriate dependencies.

From the command line, execute the following command:

The only dependency in our project is hapi and it is our framework of choice for this example. No middleware like Multer is necessary when working with Hapi.

We know that we’ll be uploading files and images via our application, so we need a place to store them. Go ahead and create an uploads directory within your project. We’ll be placing all uploaded content within this directory.

In the above snippet we’ve imported our dependencies, defined the serve location, and started the server. You’ll notice we are importing the fs dependency. This dependency will give us access to the file system and is already a part of Node.js.

With the foundation to our project created, we can focus on developing our endpoints. In this example we’ll only have a single endpoint which will allow us to send multipart form data.

Take a look at the following JavaScript code:

Let’s break down what is happening so it is easier to understand.

By default, Hapi is expecting requests to come in as JSON, not form data or multipart form data. We need to configure Hapi so it knows what will be coming in via the payload.

It is important that you define the maximum amount of bytes that will be coming in. By default it is a small number, so we’re increasing the max payload to be 2MB in size.

With the endpoint configured, we can process the request.

The idea here is that we accept our files and return a JSON array with the file information. In the above example we’re assuming that our payload will contain a key called file and there are multiple pieces of data with the same key. In other words, all files can be accessed from the file key.

Each file will be piped to the fs package and saved to our uploads directory.

Making a Request that Includes File Data with Postman

Essentially, we want to point Postman at our API endpoint and choose POST as our request method. In addition, we’ll also want to choose form-data as our request type. 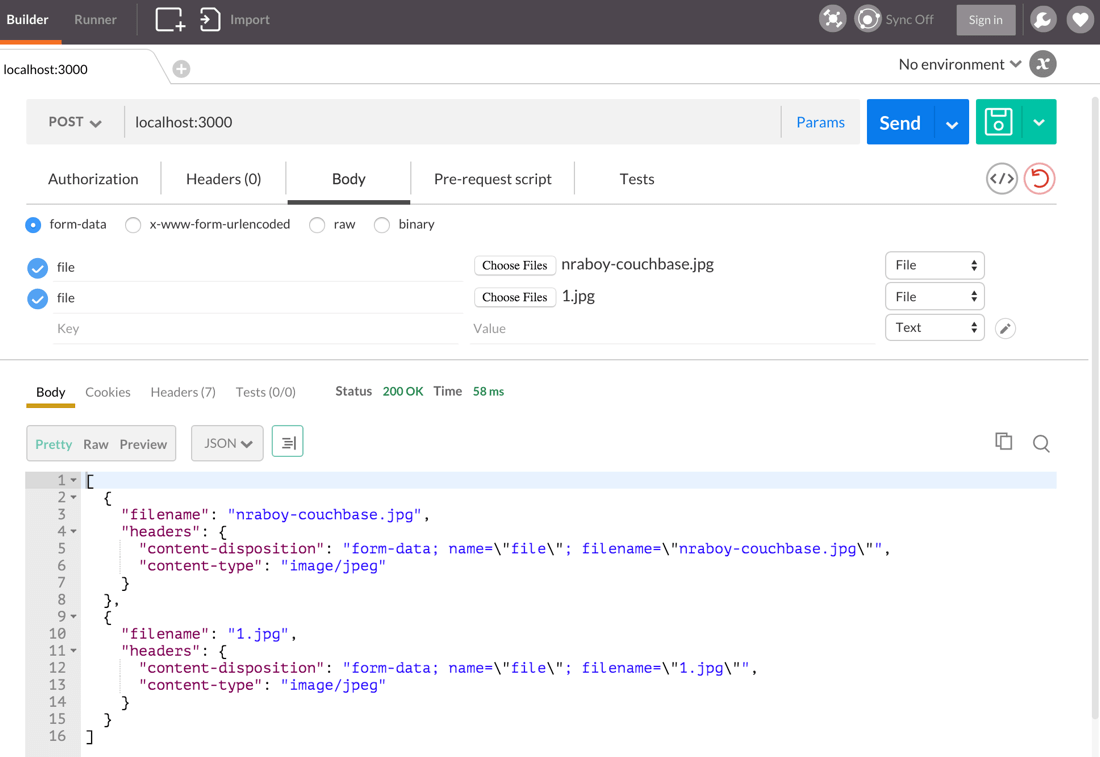 When selecting data to send, make sure that the key is called file because that is what we have it as in the Hapi application.

If the request is successful, a JSON array should be returned with the file information and any files should show up in the uploads directory of our project.

You just saw how to handle file uploads in a Node.js web application that uses Hapi as the framework. Using Hapi is an alternative to the previous article I wrote regarding Express and Multer.

If you want to take this example to the next level, try to hook it up with an object storage service like AWS S3 or Minio. For more information, check out a previous article I wrote titled, Upload Files to a Minio Object Storage Cloud with Node.js and Multer.