A few weeks back I had written an article titled, Send And Manage DigiByte DGB Coins With Node.js, which had explained how to interact with DigiByte coins via Node.js and the CLI. We saw how to keep track of a wallet, compare against the market value, and send DGB to other wallets. The catch here was that it was all CLI based and not particularly user friendly.

A popular solution towards adding a GUI to a Node.js application comes in the flavor of Electron. With Electron you’re essentially packaging a web application that can interact with native platform APIs.

Since I’m a fan of Angular, we’re going to see how to create a fancy DigiByte wallet using Electron, Node.js, and Angular.

So what are we hoping to accomplish in this particular example? Take a look at the image below which represents our final product. 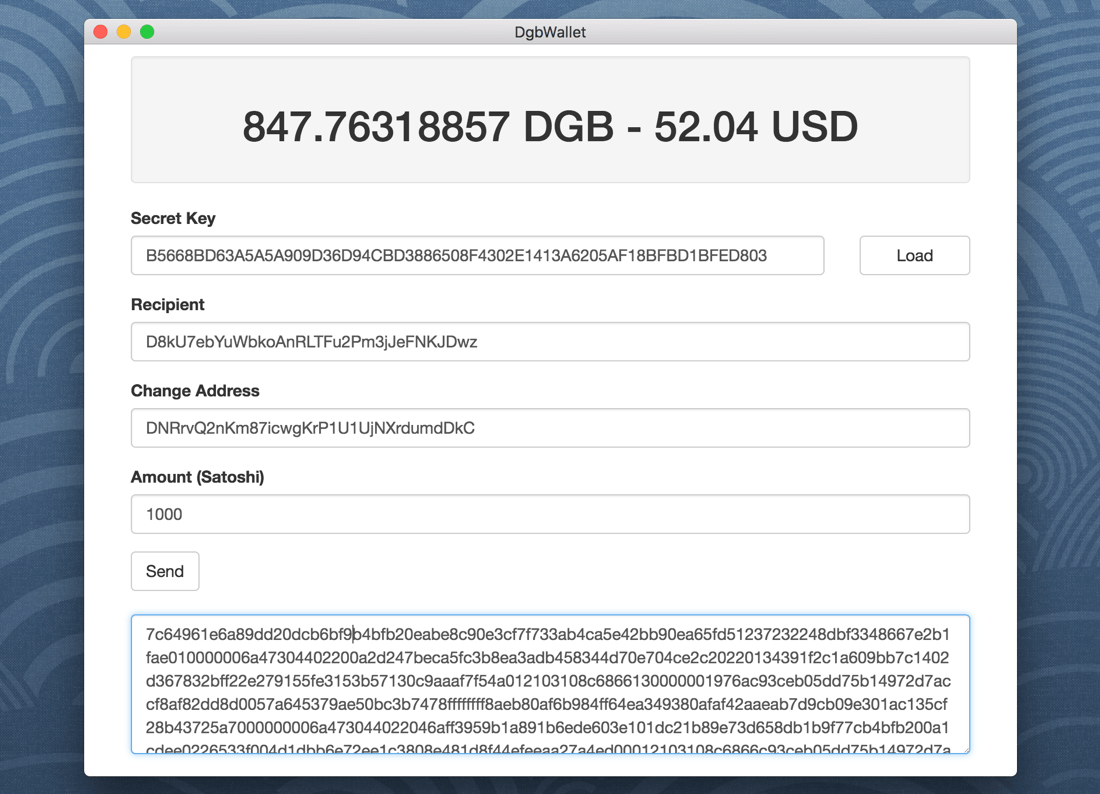 This project will rely heavily on the material that we had created in the previous DigiByte with Node.js example.

If at any time you feel you’d like to donate DGB coins, my public address is D9Ms9hnm32q9nceN2b9jNshuZhWcobrmQm. As of right now, you can pick up 100 DGB for less than $10.00.

Create a New Angular Project with the Angular CLI

Assuming you have the Angular CLI installed, execute the following:

The above command will create a fresh project that uses Webpack at build time. Before we link the project to support Electron, we need to download a few dependencies and configure Bootstrap to make it a little more attractive.

Include the Bootstrap CSS Framework and Project Dependencies

Before we crack open our project, let’s start by downloading the necessary dependencies. We’re going to be using Electron, and the official DigiByte JavaScript library. Both of these dependencies can be downloaded through the following:

With the NPM dependencies installed, let’s configure Bootstrap. We don’t absolutely need it, but since I’m no CSS wizard, it is definitely helpful.

Download Bootstrap and extract the ZIP archive. You’ll want to copy the css, fonts, and js directories into the project’s src/assets directory.

Open the project’s src/index.html file and add the following Markup:

We’re already installed Electron, but we haven’t configured anything yet. The first thing we want to do is add our driver file for Electron. At the root of your project create an electron.js file with the following:

If you’ve read the Electron Quick Start documentation, the above JavaScript will probably look familiar. Just take note of the following lines:

Notice that we’re pointing to the dist/index.html file. This means that we’ll be running the built version of our project, not the served version.

Now we need to tell our project that the electron.js file is the file that we want to use. Open the project’s package.json file and include the following line:

Electron will know what to do based on the content of the main property. While we’re in the package.json file, we should probably add a convenience script since Electron is available locally to our project rather than globally.

Within the package.json file, add the following:

The above electron script will build our Angular project, copy the electron.js file into the dist directory, and then launch with Electron.

We are copying the electron.js file because we will eventually have functions in it that will be called from Angular.

There are two more things that must be done before we can start developing our project. We need to revisit the project’s src/index.html file:

There are two differences in the above code. Remember how I mentioned that we need to be using relative paths in our project in order to retain Electron compatibility?. See the following line:

We’ve added a period character to change it from a root path to a relative path. We’ve also added the following <script> block:

In a perfect world, we would have been able to import the Electron dependencies from within our JavaScript files, but because of Webpack and how Electron does business, we’re saving ourselves a lot of headache by requiring it in the src/index.html file.

Let’s focus on creating a few things with the Angular CLI:

The above command will generate a new service where we’ll store most of our DigiByte logic. The component we plan to use already exists within our project.

Before we write Angular code, let’s write a few Node.js functions. Open the project’s electron.js file and include the following:

In the above code we’ve imported the DigiByte library and created two functions. Do not remove all the already existing Electron code that we had added earlier.

The getAddress function will take a private key and give us an address or it will create a new address for us. This will prevent us from needing to hardcode anything for this example. The createTransaction should look familiar because it was created in our previous example. It takes some sender and recipient information as well as the unspent transaction outputs (UTXOS) and creates a serialized transaction. Remember, we’re not actually going to send the serialized transaction in this example, but we could if we wanted.

Let’s dive into some Angular TypeScript code now. Open the project’s src/app/digi-byte.service.ts file and include the following:

While a lot of the above code we’ve seen already in the previous example, how we’re handling it is a little different.

Remember that import we did in the src/index.html file? This line relates to what we’ve done:

Instead of trying to find TypeScript definitions, we’re just going to declare the variable as anything to prevent compiler errors.

The releative path above refers to dist/electron.js because remember, we’re copying it at build time. Most of the functions in the DigiByteService class are RxJS versions of what we had previously seen as promises. With the exception of the following:

The createTransaction and getAddress functions above use the mainProcess variable to interact with the Node.js functions. This gives us all the Crypto library features for Angular.

The createTransaction function will get the UTXOS from the RESTful API, and pass it along with the sender and recipient information to the Node.js code.

The DigiByteService class does most of the heavy lifting. Now let’s use this service within our component. Open the project’s src/app/app.component.ts file and include the following:

We’re going to break down each of the functions in our AppComponent class for clarity. Starting with the constructor method, we have the following:

This brings us to the loadWallet method:

The final method, being our createTransaction method, looks like this:

So what does the HTML that pairs with this TypeScript logic look like? Open the project’s src/app/app.component.html file and include the following Markup:

Don’t get overwhelmed by the above HTML. Most of it is Bootstrap framework which is quite heavy to work with when developing. CSS isn’t the core of this example so we won’t think too much on it.

What matters in our HTML is our data binding. Take a look at our private key:

We’re binding the private key element to the input.privateKey variable found in our TypeScript. However, we also have a local template variable as denoted by the #privateKey attribute. The local variable can be passed to the loadWallet method when we click the button.

The rest of the HTML follows the same patterns.

In the above TypeScript we’ve imported the HttpModule and FormsModule which allows us to make future HTTP requests and do form binding. We’ve also added the DigiByteService class to the providers array of the @NgModule block.

With a little bit of luck, the project should be ready to be ran. Just make use of the electron script that we added to the package.json file.

You just saw how to create a DigiByte DGB coin wallet using Angular and Electron. This is a step up from our previous example where we had created a CLI based DigiByte wallet. This Electron application is cross-platform and can be used on Windows, Mac, and Linux.

If you’re holding DGB and you feel like donating, my public address is D9Ms9hnm32q9nceN2b9jNshuZhWcobrmQm.

Are you interested in Vue.js or Ripple XRP coins? I did a very similar tutorial titled, Create a Cross-Platform Desktop Ripple XRP Wallet with Vue.js and Electron, which focuses on developing Electron applications with Vue.js instead of Angular. That particular tutorial is based on the Ripple cryptocurrency rather than DigiByte.