Automating a Brand with Automate.io, Social Media, and Email Marketing

When it comes to blogging or running any kind of brand or business, you’re going to find a certain rhythm in the activities that you do to keep it functioning. Many of these activities are simple, repetitive, and time consuming over the long term. In certain circumstances, the activities can be automated without needing your intervention.

In this article, you’re going to learn about how I’m using various marketing and automation tools to create workflows that reduce some of the repetitive tasks that happen daily.

Before jumping into the material, I wanted to point out that this article contains affiliate links. If you think you want to sign up to any of the services that I’m using, use my links so that way I get commission for the referral. It helps to reduce the costs in keeping The Polyglot Developer operating.

We’re going to break things down to the following:

Like I said, I’m doing this for The Polyglot Developer and I even briefly talked about it in the 2019 retrospective that I created. We’re going to add a bit more depth because I think it will help a lot of developers looking to expand their brand.

Create an Automated Workflow with Automate.io

The first automation we’re going to look at is workflow automation. There are quite a few tools to accomplish this, but some of the most popular include Zapier, IFTTT, Microsoft Flow, and Automate.io.

I’ve tried all of these tools and found preference in Automate.io because it was the most affordable and accomplished everything I needed. To be honest, both Automate.io and Zapier did what I needed, but Zapier was a bit more pricy.

So what is Automate.io and how am I using it?

Think triggers and actions. Something triggers and then various actions are performed. Take the following example:

As you might recall, I switched over to Netlify to host The Polyglot Developer, which is a Hugo static generated site. Because I like to queue (schedule) my tutorials, the build and deployment process needs to happen regularly. Using the above example, I schedule an automation to happen every morning and once triggered, an HTTP request is made to Netlify to start the build and deployment process.

While not a completely complicated task, it saves me from having to go into Netlify and trigger a build every day.

So what does this automation look like in Automate.io? Take a look at the following image: 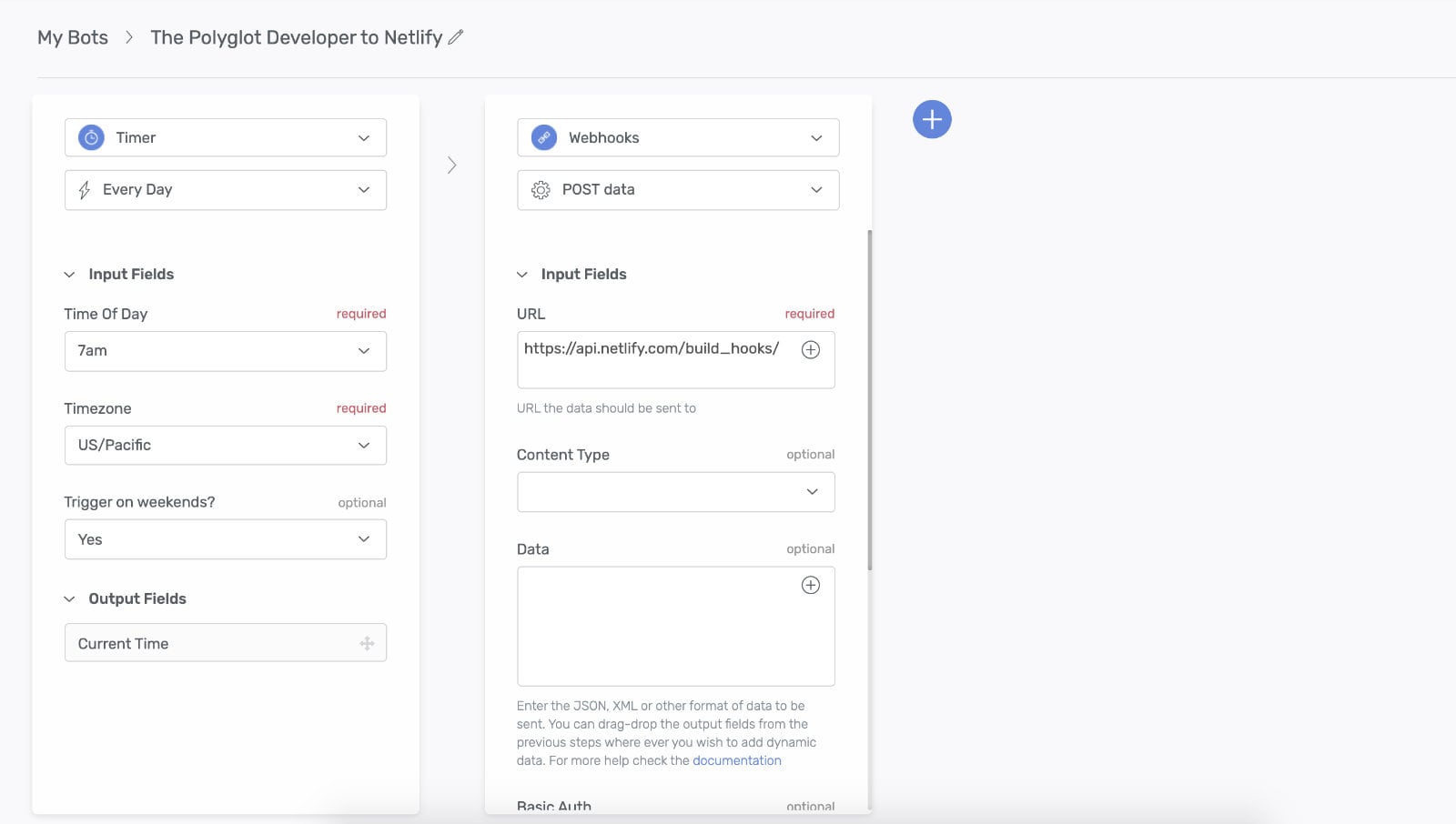 Of course in the scenario of Netlify, you will need to create a webhook within your Netlify dashboard. This is a URL to make an HTTP request to in order to start the build and deployment process.

Maintain a Presence on Social Media with Buffer and Automation

Automating deployments of The Polyglot Developer isn’t the only thing I’m doing. Posting content to social media and engaging with people is the other side of the story, and some of this is done with Automate.io.

Let’s look at an example scenario:

The above scenario is something I’m doing in order to boost engagement and sign-ups of my mailing list.

When a user follows @polyglotdev on Twitter, the automation triggers. We all know Twitter has a bot problem, so the next phase in the workflow is to check how many followers the user has. Bots don’t typically have a lot of followers, so as long as it meets my threshold, I wait a few minutes. I don’t want my automation to look like a bot, so it is probably a good idea to wait a few minutes before responding. After a few minutes, the automation will complete its four phase process by sending that user a mention thanking them for joining and sending them a link to the mailing list.

<@Follower Twitter Username> thanks for following us! If you haven’t already, don’t forget to subscribe to our newsletter as well. https://newsletter.thepolyglotdeveloper.com/

Just like with the Netlify automation, it isn’t the most complicated task in the world, but it could take time out of the day. The automation will save you time, while boosting your engagements on social media.

When it comes to social media, knowing how people are engaging with your brand can be important. Take the following scenario:

So how am I using this exactly?

When it comes to social media, unless you’re actively searching and running reports, you may not know if someone is engaging with you unless they mention you and you get a notification. I’ve found that only a small percentage mention me directly, so often I don’t know about it.

With Automate.io I am triggering an automation when something shows up in a Twitter search using the following criteria:

If someone is saying something about a URL of mine, I look up the user in question to make sure they aren’t a bot based on the number of followers they have. If the number meets my threshold, then that user is automatically retweeted.

User engagement is only part of social media automation. The other part is on content publication to help spread awareness of your product or brand.

Let’s use the following scenario:

This is an example on how I’m automating how The Polyglot Developer content is shared on social media. 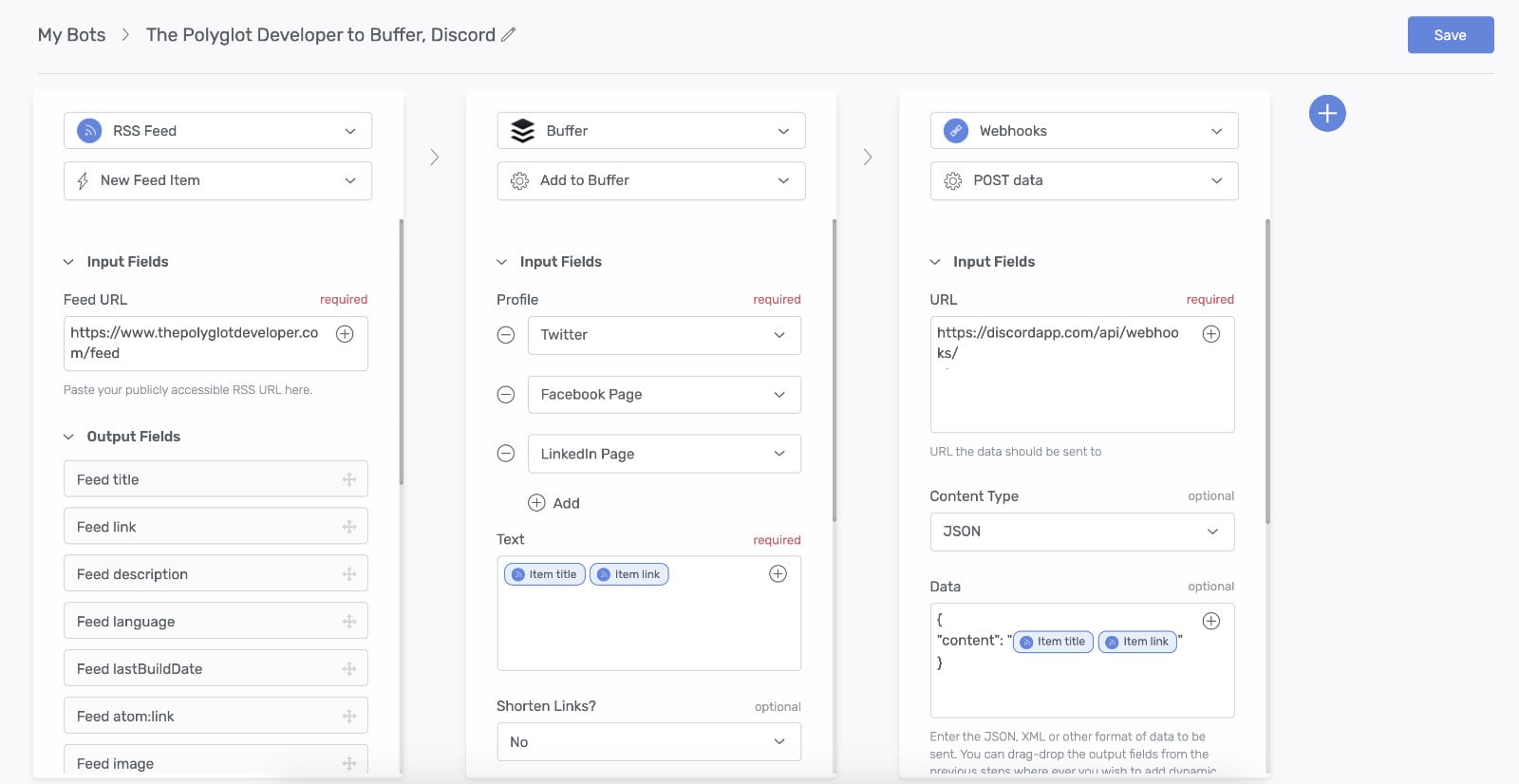 So a little more on Buffer if this is your first time hearing of it.

Buffer is a tool for scheduling and queuing content for multiple social media accounts. Rather than posting immediately, you can either add the post to a queue of defined dates and times, or schedule on a particular date and time rather than waiting for the queue to deplete. This is a tool similar to Hootsuite and Sprout Social, but cheaper.

Automatically adding content to a queue makes it so you have a consistent stream of content being released for your online community.

Now let’s start talking about email automation. It is slightly different than automating blog entries in a social media queue or establishing an automated workflow. Instead, it is about automatically grouping people’s interests and delivering them the content they care about versus random email blasts.

Some popular tools consist of:

I’ve only played around with Mailchimp, ConvertKit, and Sendy. In fact, all three have at some point in time, been used for email deliveries for The Polyglot Developer.

When it comes to email automation, most tools will have some flavor of it, but not all are considered equal. For example, Sendy has automated drip campaigns where a series of emails can be sent X number of days after the prior email in the series. This is great if you just want to send basic email series, but it doesn’t give you much control to tweak the emails based on the interests of the user.

The last time I used Mailchimp, things were similar to Sendy.

As of right now I’m using ConvertKit for The Polyglot Developer because of the automation rules that can be created.

The automation rules that ConvertKit has is similar to how Automate.io works. There is a main trigger and then any number of events to process after the trigger activates.

Take one of my automation rules for example:

In this case the person was tagged as interested, so the related emails they receive should yield good results as these are targeted emails.

So how does one become properly tagged?

Think about newsletters and welcome series emails. In most circumstances these emails will contain links or downloads. If the user clicks a link or download, they can be tagged based on the subject of that link or download.

The tagging in ConvertKit happens in The Polyglot Developer newsletter. If you’re a subscriber, you’ll probably be familiar with the “Recent Blogs” list of all the blogs that were published the month prior. Clicking each link will tag the user which in turn will trigger an automation and send relevant emails because of the users interest.

When users are receiving emails on the subjects they’re actually interested in, the open rates and click rates tend to be significantly higher.

This was slightly different than much of the content that appears on The Polyglot Developer, but knowing how to market your brand in an automated fashion is great for anyone, including developers.

As a reminder, this particular article contained affiliate links. If you plan to use any of the tools mentioned, it would mean a lot to me if you used the links I provided so I receive a commission or credit from the services mentioned.