My Activity Report For 2020

It’s that time of year again. It is time to reflect on the things that happened on The Polyglot Developer, what went well, what didn’t go so well, and what the upcoming year looks like.

If this is your first time stumbling on an annual report article for The Polyglot Developer, you won’t find any tutorial content. This is mostly a numbers-based reflection, but it could be useful if you’re interested in building your own blog, video channel, or overall brand.

In this particular activity report, we’ll follow the same formula as the 2019 report, which includes analyzing the written content on the blog, video tutorials on YouTube, the podcast and Twitch channel, and any services and operating costs required to keep the channels alive.

Before getting too far into the article, I wanted to be clear that this article contains affiliate links. If you’re interested in trying out one of my recommendations, note that I’ll receive some kind of commission or service credit. You don’t have to use my links, but it would be greatly appreciated.

The blog (you’re reading it), which is where The Polyglot Developer was born, continues to be the highest performer of all the channels. To get an idea of the numbers we saw in terms of viewership, take a look at the following image:

My theory is that the competition has become more fierce combined with the reduced content cadence that the blog has had this year.

The Polyglot Developer is still hosted on Netlify which means that I’m not paying anything to host the site beyond the domain name and email address. Hugo is the static site generator being used so everything that appears on the site is pure JavaScript, HTML, and CSS.

Unlike the blog, the YouTube channel is seeing growth. Take the following image for example: 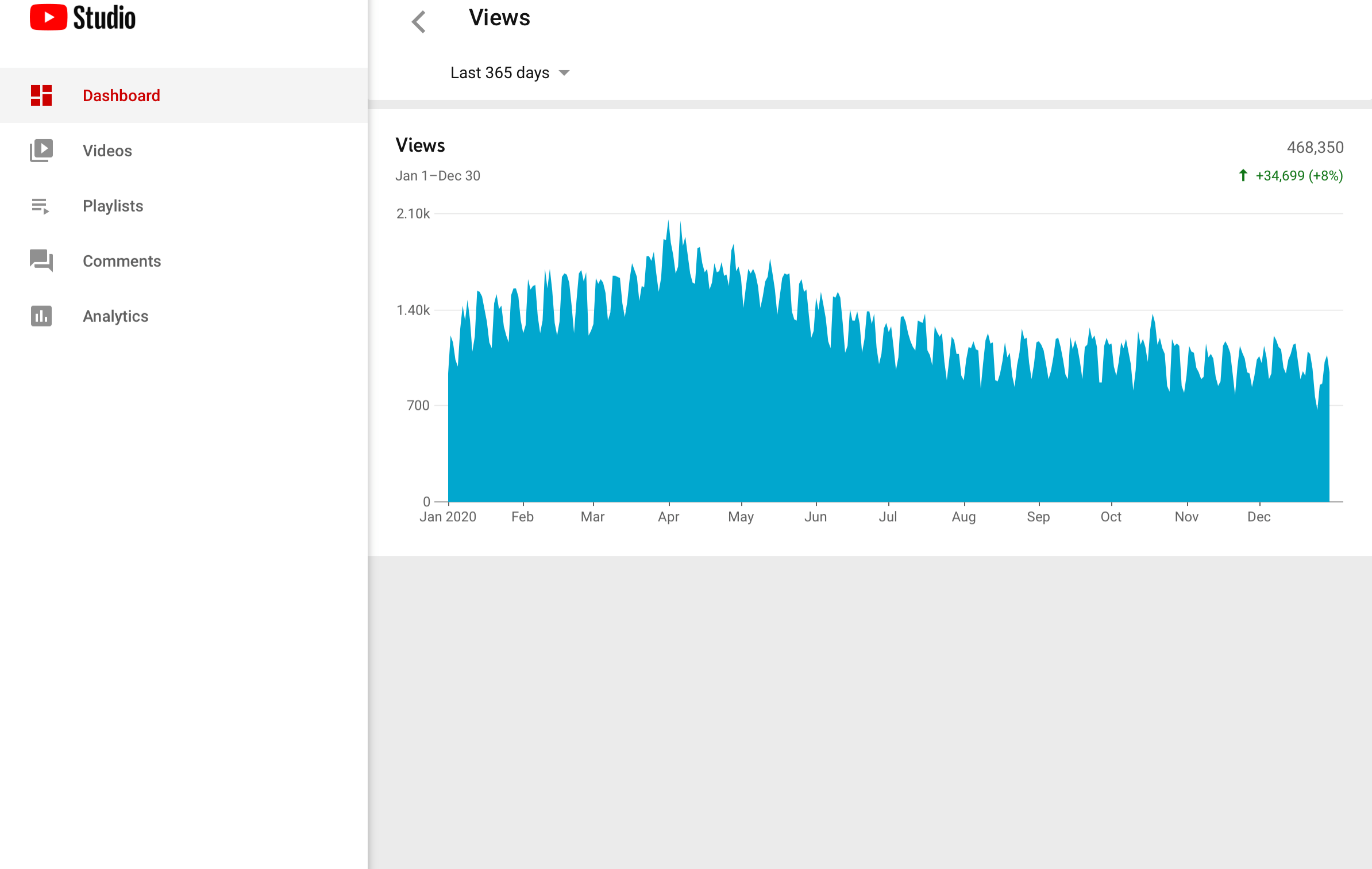 In 2020 we managed to get 468,350 views on all of the videos published. This is up from the 414,200 views that we saw in 2019 To make things better, there were only 35 new videos published, up from the 32 that were published last year. YouTube is one of those high performing networks that is only getting bigger.

The podcast probably received the least amount of love in comparison to the other networks that The Polyglot Developer operates on. Heck, the last published episode was published in July 2020. What should have been a 12 episode year turned into a 7 episode year.

Operating a podcast is a lot of work. The following goes into each episode:

For any 30 minute episode, it probably takes a few hours of work, if not more. So what went wrong with podcasting in 2020? It came down to a lack of time and a lack of guests. Being on a podcast wasn’t a priority for a lot of people given the lockdowns and other 2020 related drama.

So what do the rest of the numbers look like?

The podcast is still being hosted on AWS S3. This means I don’t have access to metrics on a per episode basis. Instead I have to look at the billing information in AWS and do some math. It isn’t a great way to come up with numbers and the numbers are not 100% accurate, but it is close enough. The math is pretty much taking the total bill for storage and transfer and doing some simple division against the average podcast episode file size.

The cost wasn’t huge to run the podcast and the numbers weren’t bad either. Even though the podcast wasn’t a priority, it is still absolutely worth having. It will be revisited in 2021 as the world recovers.

The Twitch channel is probably the newest of the channels on The Polyglot Developer. In fact, it was started in 2020 as a way to try to engage with the community live.

The below screenshot of the Twitch administrative dashboard shows some of the metrics around the channel: 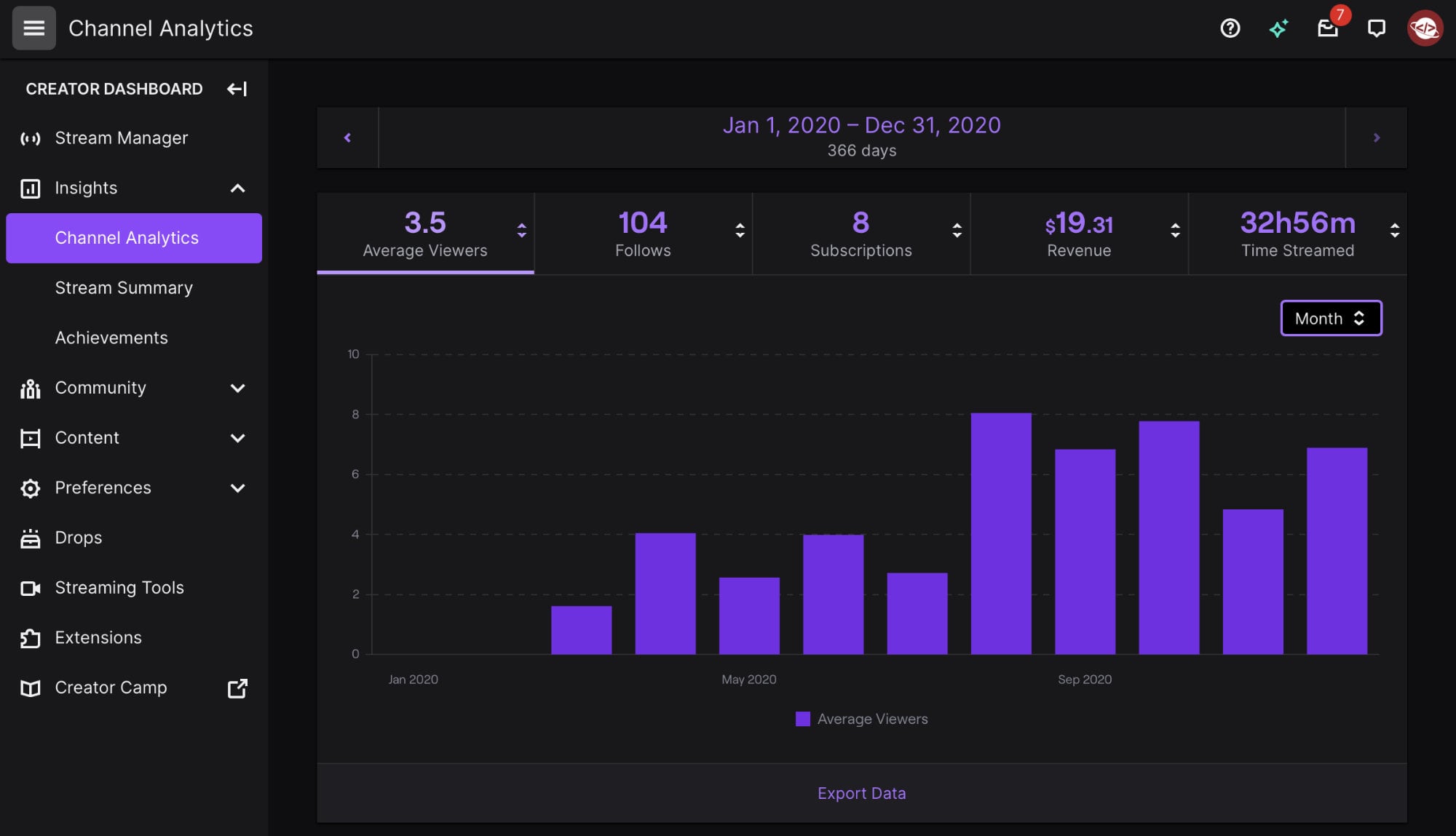 To make sense of what we’re looking at in the above screenshot, I’m going to break it down:

Should I quit my day job and live off the streaming revenue? I probably can’t live off $19.31 a year, but at least the channel was growing. What the screenshot doesn’t show is that we’ve only had 10 streams in 2020. The channel also managed to reach Affiliate Status, something that isn’t easy to accomplish.

So here is the deal. Knowing how to stream on Twitch is a very desireable skill to have. It is why I created the course Live-Streaming on Twitch for Beginners. However, it is incredibly difficult to get noticed on Twitch if you’re in technology. It is still a gaming focused network and with COVID-19, people are generally burned out from watching streams.

If you’re looking to gamble on Twitch, it is worth experimenting with, but don’t put too much energy into it.

There were a few courses released in 2020, most of them not on a software development related topic. Remember, COVID-19 made 2020 a lousy year so many developers or people in general found themselves having to pivot. A few courses were made with this in mind.

Of the courses available, the following were new:

New courses wasn’t the only focus for 2020. A few years back the course, NativeScript for the Angular Developer, was released on Udemy. It was one of the more popular courses and since Angular and mobile development changes so quickly, it made sense to publish a refreshed version. The refreshed version was created brand new, but used the same topics as the previously published course.

The data around all of the courses for the year can be seen in the following screenshot: 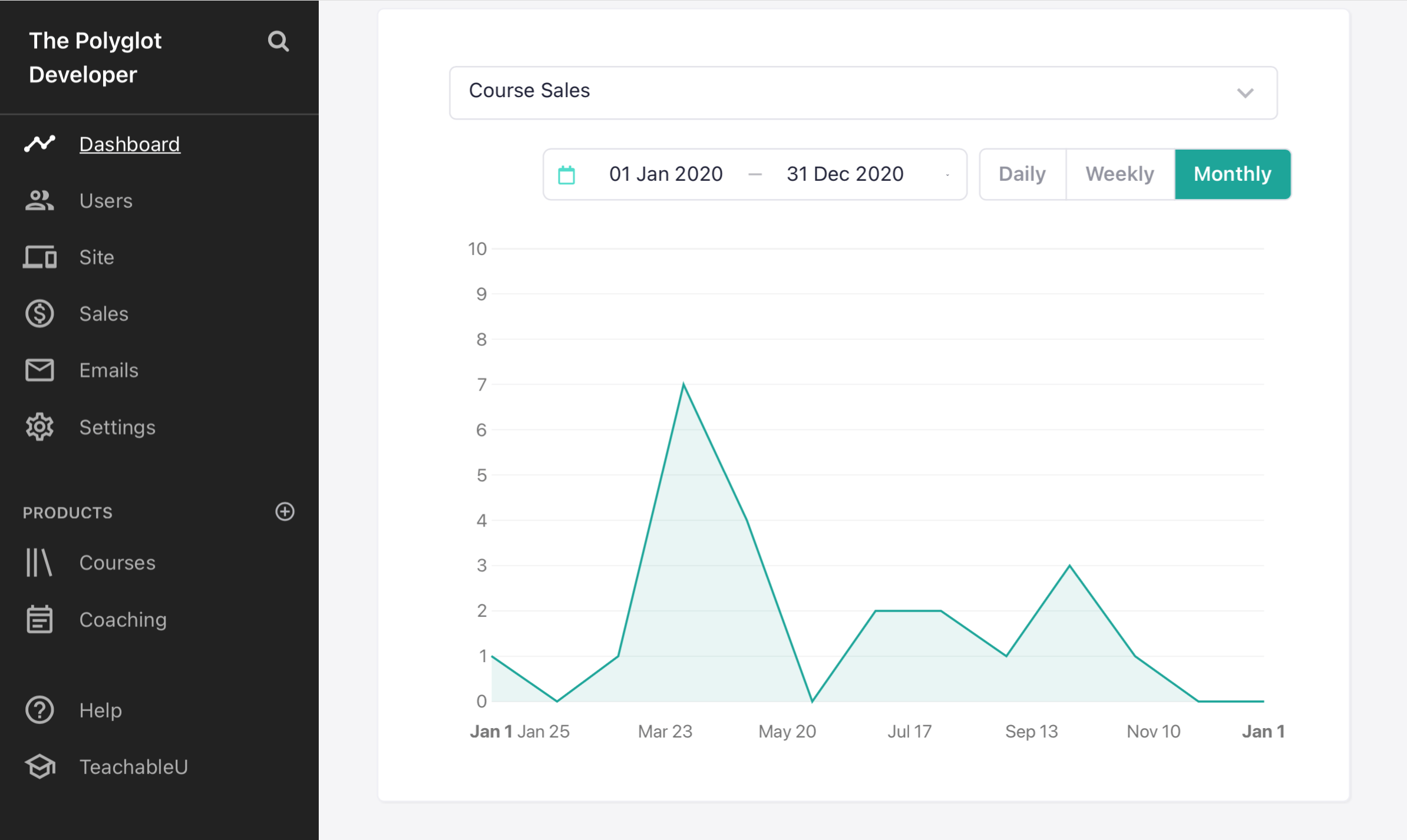 All official courses are hosted on Teachable and found through The Polyglot Developer courses portal.

There weren’t any new books published in 2020. The previously published books performed better than the courses, but also saw a decline in comparison to other years.

The conference scene was a bit different this year. The in-person events were a scarce, but it doesn’t mean that events didn’t happen. They mostly just happened online. Remember how I said it’d be valuable to know how to stream to Twitch? Organizing events is where those skills might be valuable.

So what events did I participate in this year? Here are a few:

As you can see, most of these events were Meetups. I absolutely love Meetups and find them to be better than any conference. In fact, I organize the Tracy Developer Meetup in Tracy, California.

Will the event participation be up in 2021? Probably not, but there will be plenty of things happening.

Tools, Services, and Operating Costs for The Polyglot Developer

While you could host a blog and build your brand for pretty much nothing, The Polyglot Developer has grown to a point where paid software and services add a huge convenience.

To get an idea of what’s being used and the cost (annually), take the following:

The above services are responsible for things such as hosting, email marketing, social media marketing, course hosting, calendar management, and podcast hosting. Could free alternatives be used? Absolutely, but I’ve found that the list above is working quite well.

From a software perspective, I’m currently using Camtasia to edit videos and Reaper to edit podcasts. In 2020 I transitioned from Mac to Windows and had to make a few changes on my software.

To put things into perspective, The Polyglot Developer had about $1,379.55 in operating costs for 2020.

While 2020 was lousy for the most part, The Polyglot Developer continued to produce content. The numbers weren’t quite as high, but from a content and community perspective, things are still solid.

If you’re looking to start building your own brand and want to use some of the services that I listed, make sure to use my affiliate links. When you sign up, I’ll get credit for your sign-up which can help keep things running.