I was recently at NativeScript Developer Days 2017 and I was anxious to learn more about Telerik’s new developer tool called NativeScript Sidekick. I had heard about Sidekick prior to the conference, but I never had the chance to see it in action.

After seeing Sidekick in action, I must say, it is wonderful!

We’re going to see why Sidekick is so great for NativeScript development and how to get the most out of it for your own Android and iOS projects.

So what exactly is Sidekick for NativeScript? Here is a description per the official website:

NativeScript Sidekick is your faithful companion for NativeScript development. With Sidekick, you can focus on building the exciting parts of your mobile app and let Sidekick handle the important, but tedious parts. You can use Sidekick’s rich starter templates, verified plugins, cloud builds, and debugging all while using your own preferred IDE and tooling.

One of the major pain points for people getting into mobile development is the chaos behind iOS and Android installation and configuration. This is a problem that plagues mobile development, with and without NativeScript. Sidekick eliminates this problem through cloud builds that don’t even require Android or iOS to be configured locally. Heck, you don’t even need a Mac to build for iOS.

Let’s take a look at using Sidekick. You will need to have downloaded it and installed NativeScript through the Node Package Manager (NPM). For help installing NativeScript, check out the official documentation.

With both items installed, open Sidekick for the first time. 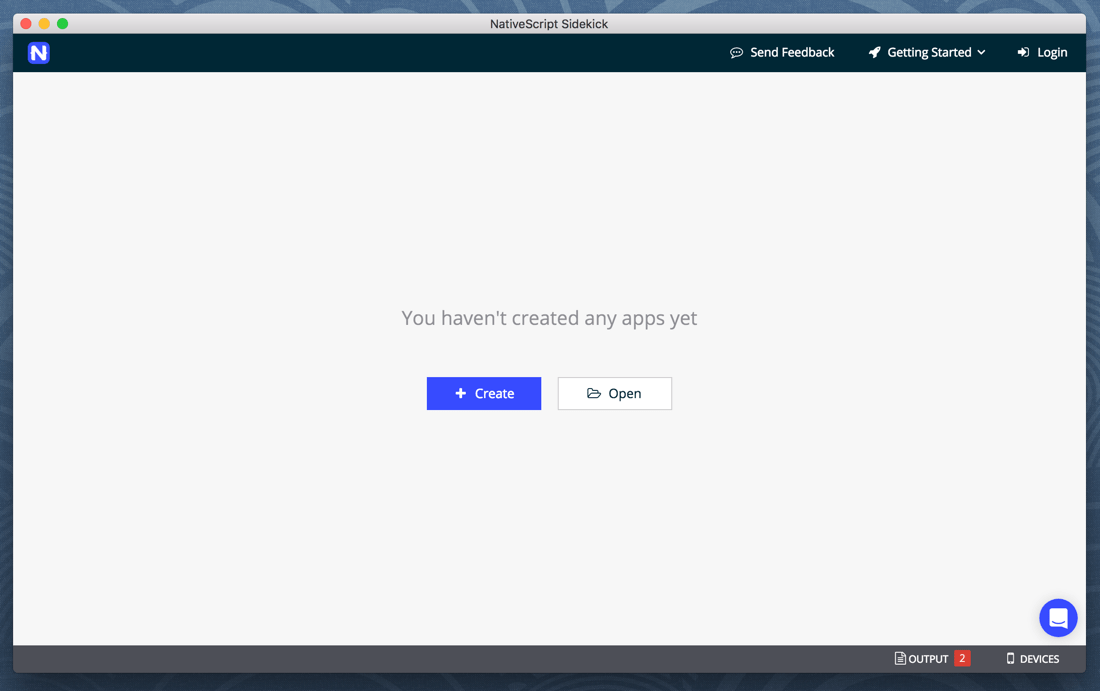 You shouldn’t have any projects as of right now. Before you create your first application, you should probably sign in. If you don’t have a Telerik account, it is free and it will allow you to use the cloud build system.

When you’ve signed in and chosen to create your first application, you’ll be presented with a variety of things.

You’ll be able to name your application and choose which template to use. I knew there was a JavaScript, TypeScript, and Angular template, but before using Sidekick I had no idea there were navigation drawer and tabs templates. This is great because if you were a former Ionic Framework developer like I was, they also had an option to create a navigation drawer and tabs project.

With the project created, you will have the opportunity to further customize things.

You’ll be able to change the information about your project as well as apply custom Android and iOS configurations. In reality Sidekick is only offering a UI that alters the project’s AndroidManifest.xml and Info.plist files so you don’t have to bother with them. It may not seem like a big deal, but anyone who has had to mess with these files knows that it can often be a pain in the butt.

In addition to modifying the build settings for each platform, you’ll also have access to a preview of all the platform assets.

Being able to see your platform assets is convenient because it is a reminder how many Android and iOS images you’ll need before publishing and what they look like without looking at a device. To fill you in on a little secret, I wrote about automatically generating these assets in a previous article on the topic.

All of this is great stuff when it comes to managing a project, but like I had mentioned, I think the real magic is in the builds. 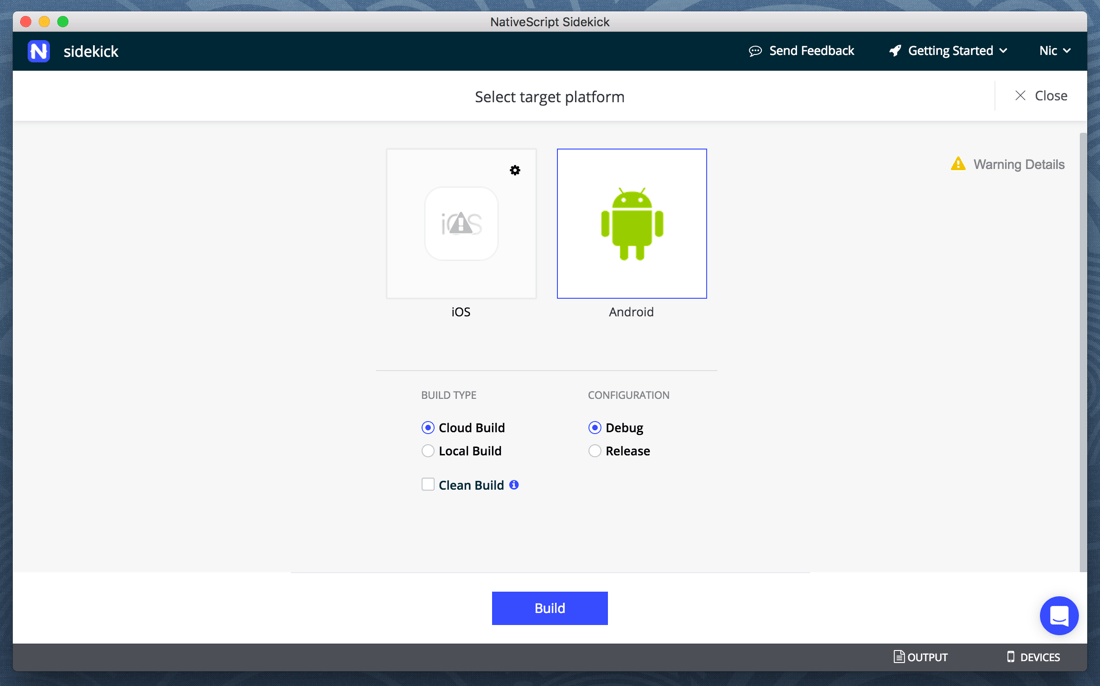 Say for example that you’d like to build for Android. You do not first need to have the Android SDK available. The project will be uploaded to Telerik’s servers and built. 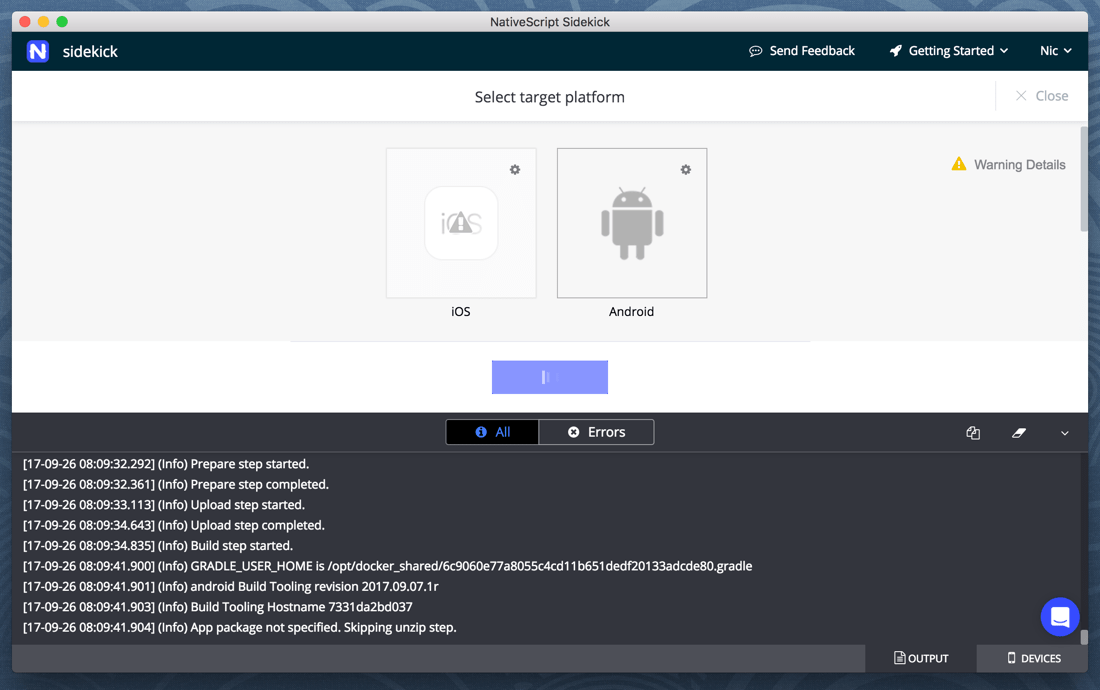 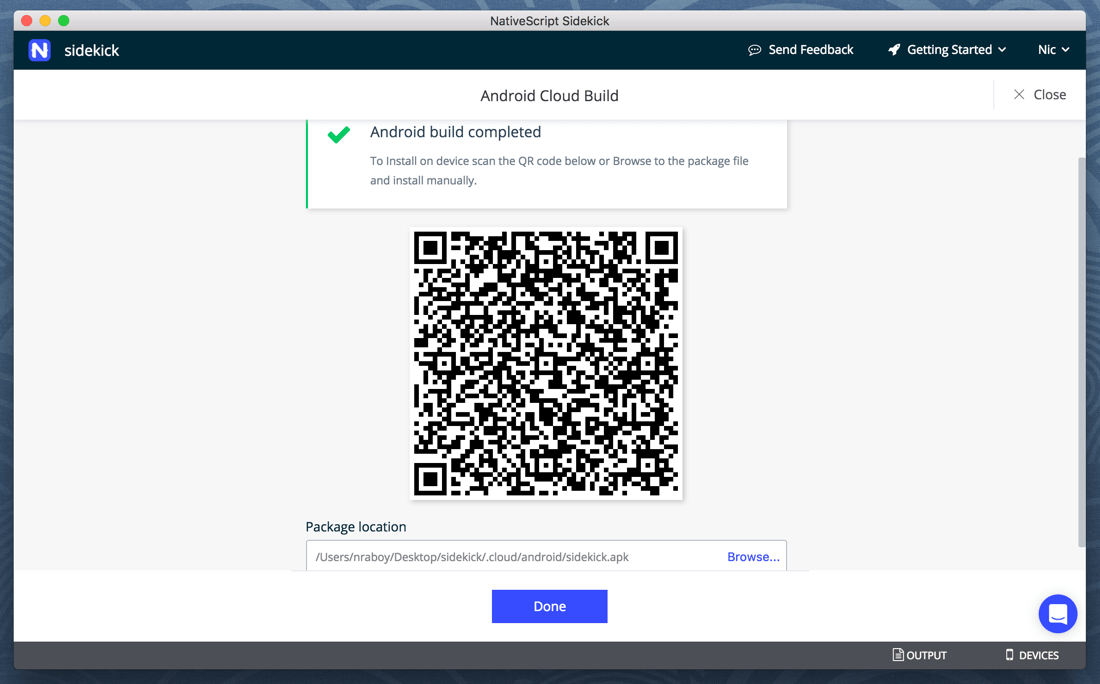 Since the first release of iOS, Apple had always placed owning a Mac a development requirement for iOS applications. This has always been crazy because it alienates all the talented developers stuck on Windows or Linux machines. With NativeScript Sidekick and cloud building, Telerik can take care of this for you regardless of the developer operating system.

When choosing to build for iOS, you’ll need to select your appropriate provision profiles and certificates. 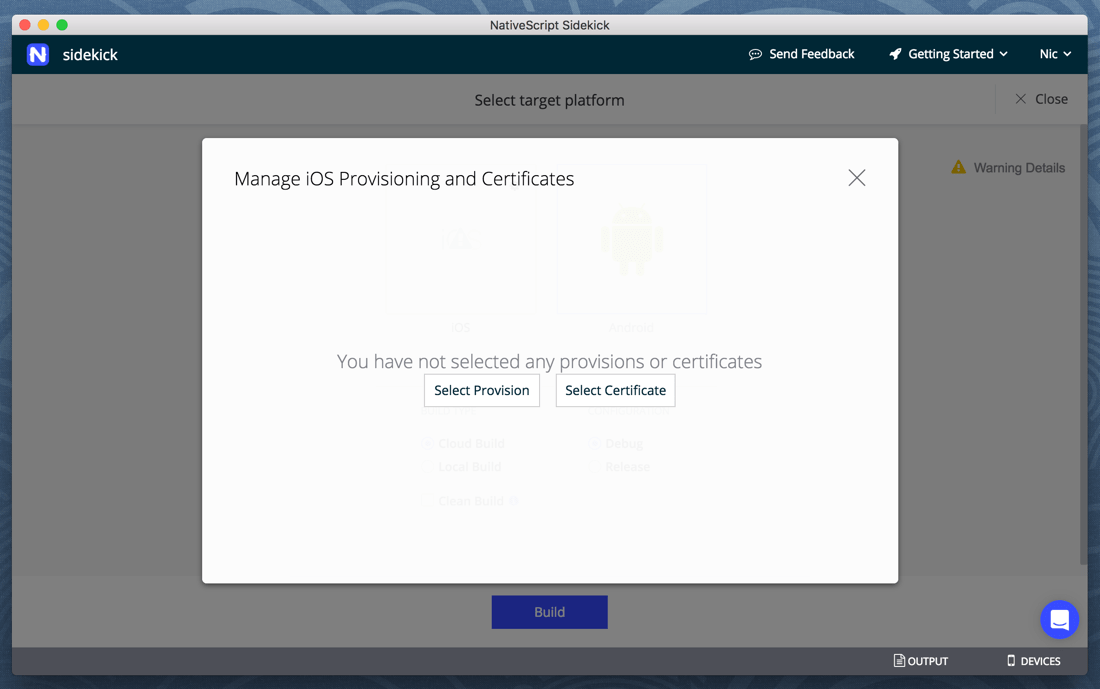 The provisioning profiles and certificates can be generated from your Apple Developer account. Using Sidekick does not eliminate the need to pay Apple $99 per year to develop for iOS. It only eliminates the need to be using a Mac.

I was very impressed with what I saw at NativeScript Developer Days 2017 as well as what I got from first hand experience playing around with NativeScript Sidekick. The Sidekick utility will make NativeScript and mobile development way more inviting to developers who might be new to the subject.