My Activity Report For 2017

This marks the third year that I’ve been producing content for The Polyglot Developer and all of its channels. It’s been a long year and I’ve accomplished a lot, some of which was different than previous years.

Below you’ll find my statistics that may help you if you’re planning on creating a blog or developing a course. It will give you an idea of costs and what to expect.

This was an interesting year for the blog. When I started writing, I was using WordPress and life couldn’t have been better. However, developers fell in love with my content and WordPress was demanding more server resources than I could afford due to all the traffic. Not to mention, adding resources hardly improved the performance of the site.

Now the blog is powered by Hugo and a custom theme that I designed. You can read about the transition of the site in an article I published titled, The Polyglot Developer has a New Look.

With the migration in mind, the stats can be seen below:

You’ll notice that the traffic decreased versus what I had in previous years. This is to be expected in any migration because of SEO changes. However, to have more than 2,000,000 pageviews in a calendar year is still very good.

Even with the transition away from WordPress, the blog is still using Disqus to manage comments. A graph of the comments for the year can be seen below.

The total number of comments for the year was 1,538, which is a drop from last year. I’d like to think this drop is directly related to the change in SEO as a result of changing blog platforms. Next years results should clear things up.

For hosting, I am still using a Digital Ocean VPS. The virtual private server (VPS) specs for my blog include 2GB of memory, 2 CPU cores, and 3TB of bandwidth transfer. At the time of writing this, I’m paying $20.00 per month, plus 20% for backups at Digital Ocean.

The server specs and pricing between this year and the previous did not change.

The YouTube channel for The Polyglot Developer has been experiencing huge amounts of traffic as well. While it doesn’t always happen, I try to make a YouTube video for every written blog article that publishes.

The channel has 8,170 subscribers with 165 videos published. The full stats for my channel can be seen in an image below. 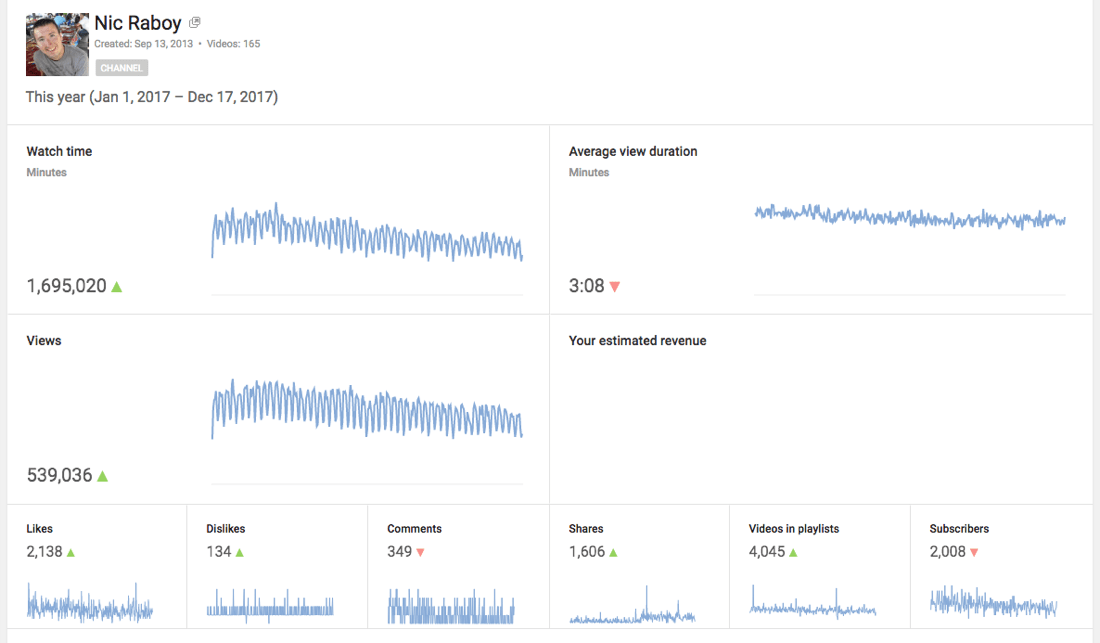 As you can see, the channel received 539,036 views this year in comparison to the 523,239 views from the previous year. Views were not the only metric that increased significantly. Of the videos that were published, there were 2,138 likes and 1,606 shares.

There was an increase in dislikes for the year, but that is to be expected as traffic increases.

If you can believe it, I actually have not published any courses in 2017. However, that doesn’t mean that I didn’t release updates to previously recorded courses.

When 2018 rolls around, I have been plans to create and release several new courses.

Conferences and Events That I Spoke At

Being an advocate for technology, both as a hobby and professionally, comes with a ton of speaking engagements. From what I’m told, developers find my information valuable and are interested in attending sessions or events that I’m participating in. Here are the conferences that I took part in during the year:

While the list is quite long, not all of them were speaking opportunities. I also omitted the user groups that I spoke at via Meetup.com.

I’m always interested in teaching other developers cool things, so if you run an event or think I’d be a fit for an event, let me know about it on Twitter.

I think the 2017 calendar year was a great one for The Polyglot Developer. We got a new site and continued producing great content for developers of all skill levels. I appreciate everyone who has approached me at events to give me their opinions of my work as well as those who’ve reached out on social media.

Just like I do every year, this is where I ask everyone to take a moment to give back. If you’re benefiting from The Polyglot Developer, consider donating via PayPal or by purchasing something from my Amazon Wishlist. I’m never going to force anyone to donate, but it would be a nice gesture to help keep the site and its channels alive.

If you recently became wealthy from blockchain currencies, consider donating some at any of the following addresses:

There are affiliate links on this article for Digital Ocean and Amazon. If you plan to purchase anything listed in this article, please use my links so I get some credit.