When it comes to developing a game, at some point in time you’re going to want to animate some component within the game. These animations could be character sprites or even elements that exist as part of the background.

A few months back, I wrote a tutorial titled, Animate Spritesheets in a Phaser Game, around creating a spritesheet and then animating it within a Phaser game. Phaser is an awesome framework, but it doesn’t compare to Unity on a professional level. So what if we wanted to animate a spritesheet in Unity?

In this tutorial we’re going to see how to animate a spritesheet, the same example from the previous tutorial, but this time with Unity, animation clips, animator states, and some basic C#.

To get an idea of what we want to accomplish, take a look at the following animated image:

In the above animated image we have a plane with wind streaks to give the illusion that it is flying. After a certain amount of time or event, the plane disappears and an explosion-like animation plays before the entire sprite disappears from the screen. Both animations are part of the same spritesheet and the same game object within Unity.

Create a New Unity Project with the 2D Template

Before we get to the core material, it makes sense to start with a fresh Unity project. Within the Unity Hub, create a new project using the 2D template. 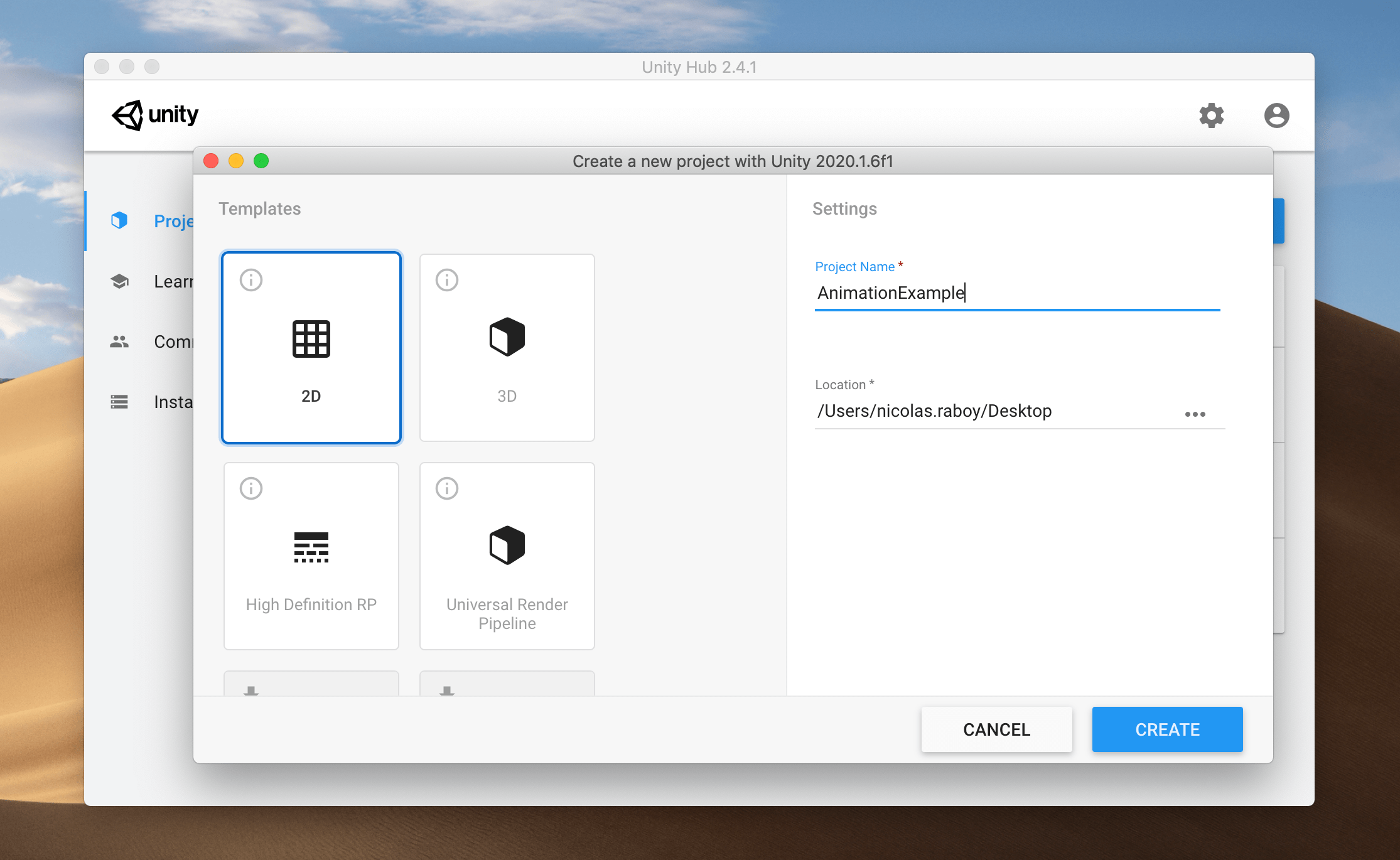 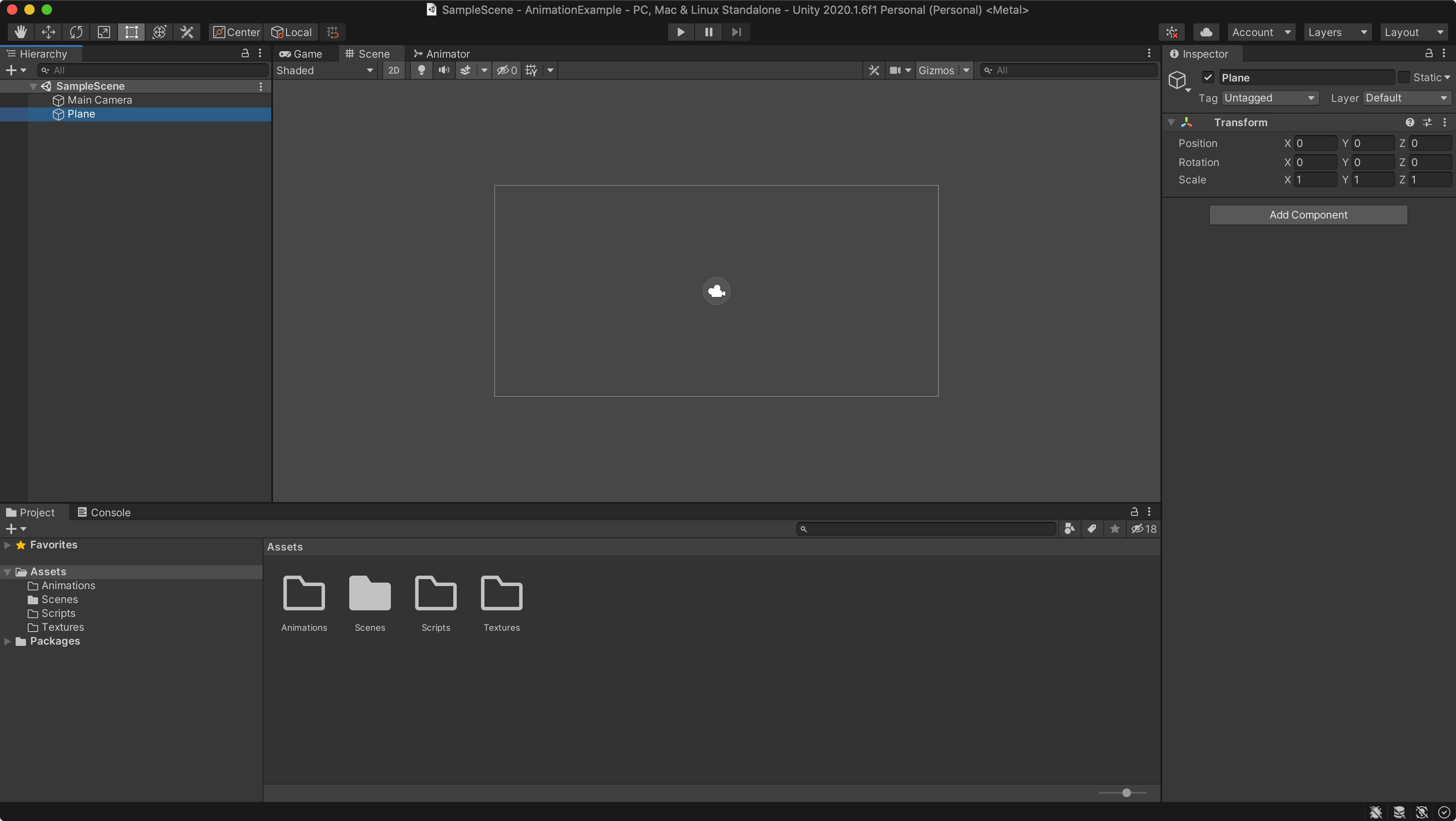 Even though we have a project with a game object, we’re not actually rendering anything to the screen. The game object is not technically a sprite and it has no animations associated to it.

In Unity we could create, say ten images, and add each image into the project. The problem with this is that loading individual images is resource intensive and inappropriate for a game that is dependent on performance. For this reason, tiling each frame into a single image, otherwise known as a spritesheet, is a better option.

Take the following spritesheet for example: 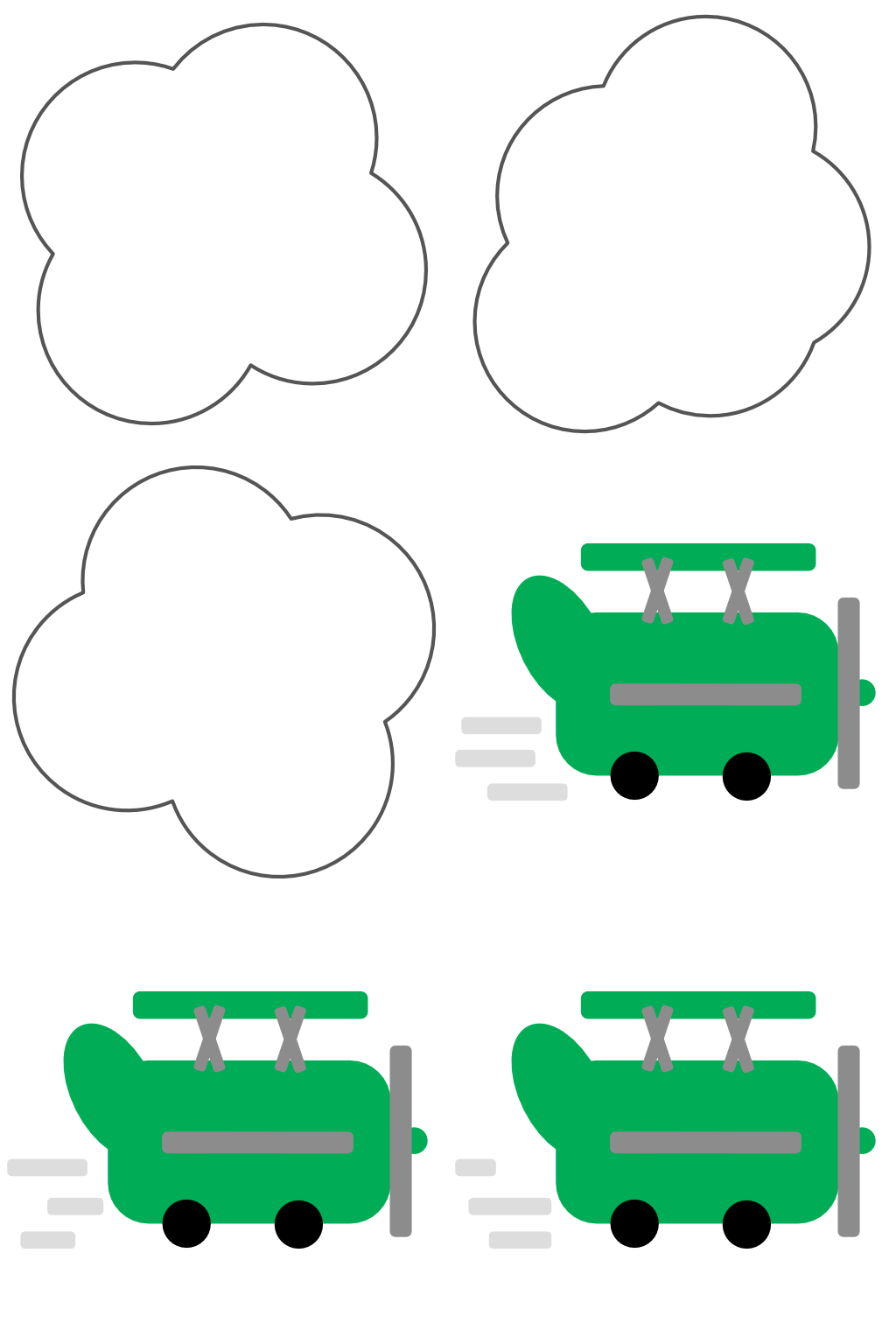 The above spritesheet was created with a software called TexturePacker. You don’t need TexturePacker to create spritesheets, but it makes life significantly easier. The alternative is taking each of your sprite images and building a spritesheet manually with a tool like Adobe Photoshop.

Go ahead and download my spritesheet and add it to the Textures directory within the Unity project.

Within Unity, we need to define what exactly the image file is. This means defining each image in the spritesheet as well as the pixels per unit. 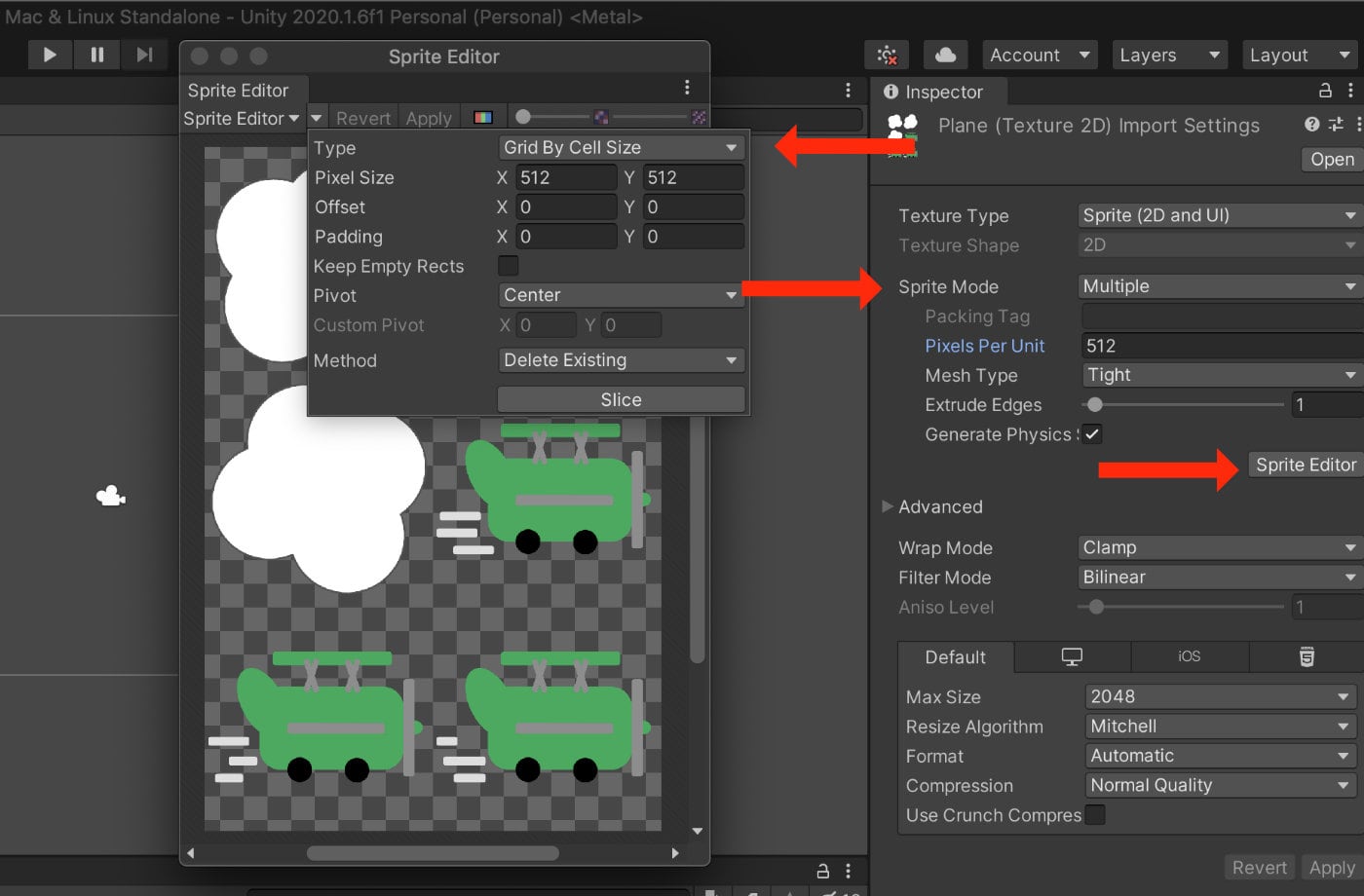 With the spritesheet properly referenced within Unity, click on the game object, and then choose Window -> Animation -> Animation from the menu. 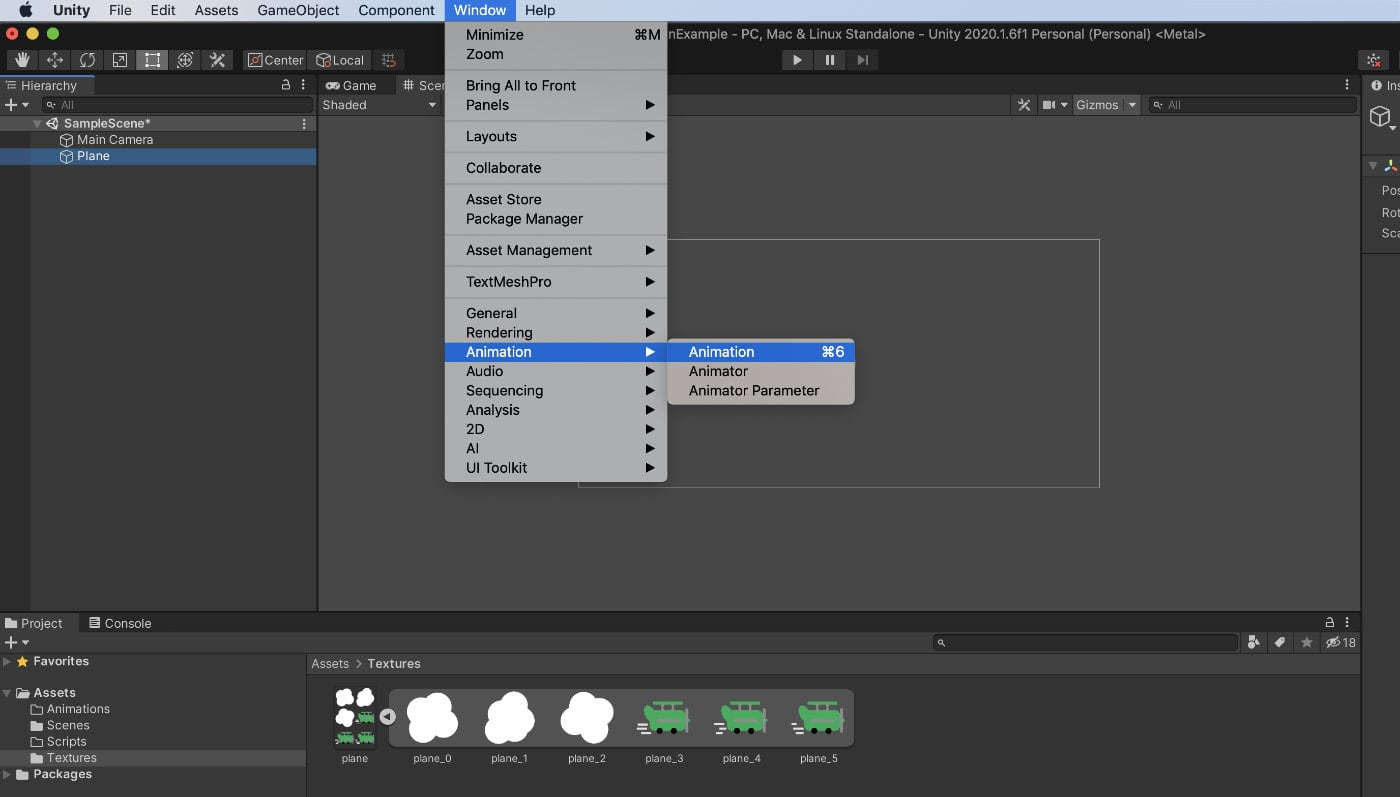 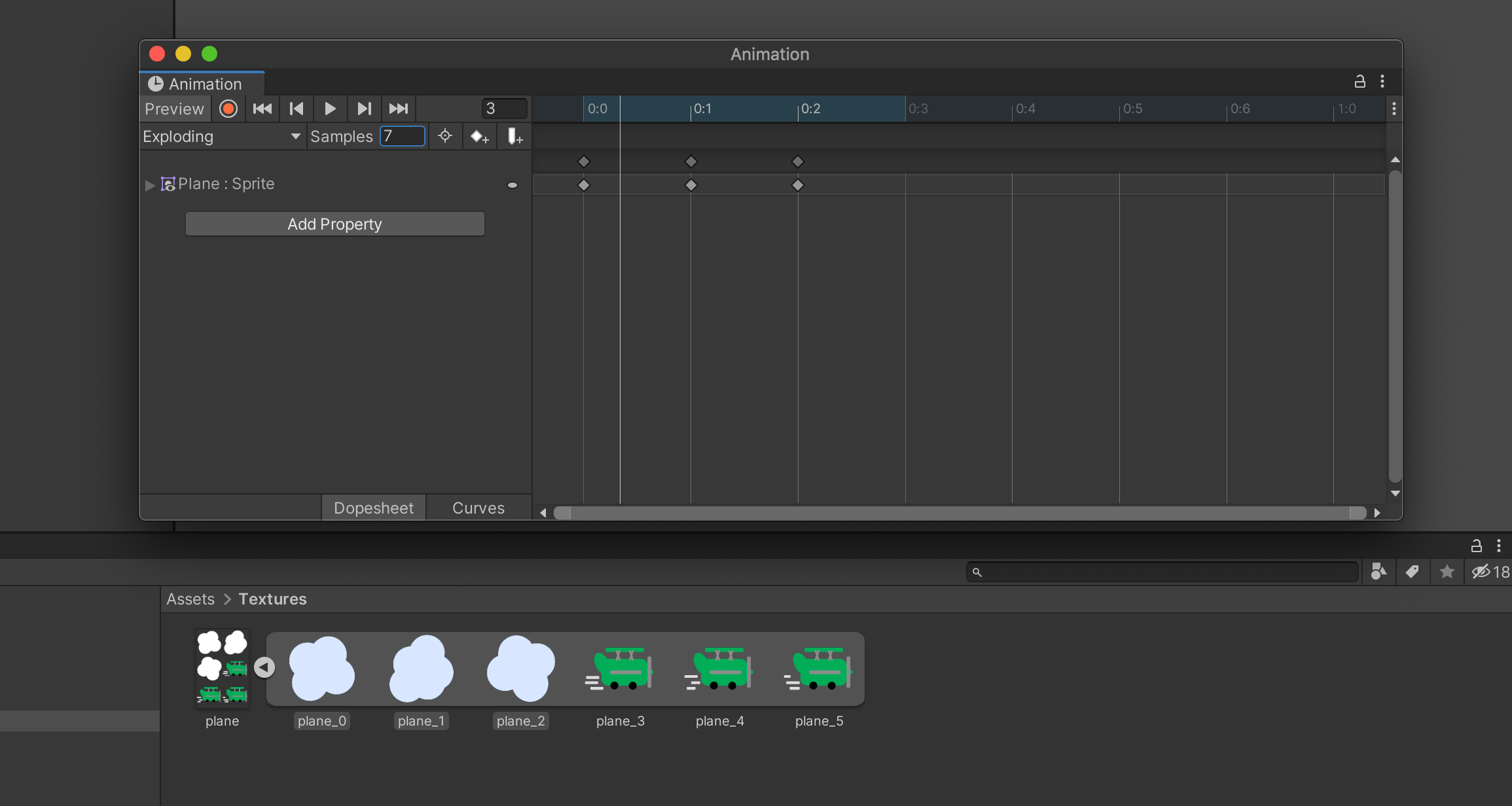 Select one of the two new animation clips within the Animation window and drag the relevant sprites from the spritesheet into the window. These sprites will animate for that particular clip. Depending on how many sprites you have, you may need to lower the Samples field. In our example, seven is a good number to work with.

The animations are defined, but we need to be able to determine when they should play. This is where the animator comes into the scenario.

Managing Animation Clips with States in a Unity Animator Controller

The Unity Animator is where we define each of our animation states and how to transition between them. In our example, we’d transition to flying, and then from flying to exploding, but probably never exploding from another state. 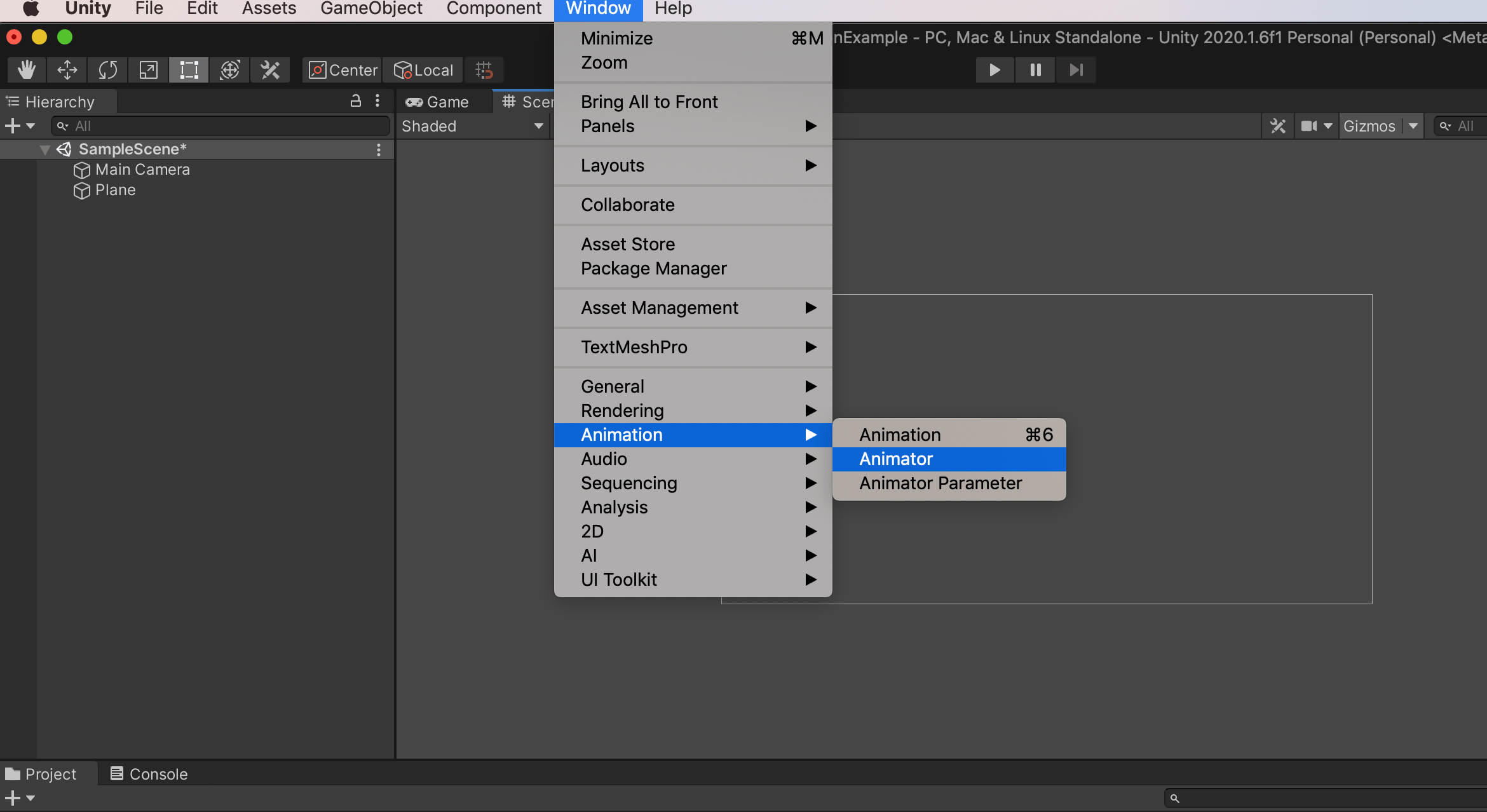 You should be presented with a window that has a few states, two of which are named after the animation clips that we had created prior. You’ll also notice an Any State, Entry, and Exit state that come as part of the animator state lifecycle.

The goal here is to define transitions between the states. For example, the Entry state leads to the default animation, which should be Flying in our example. The Any State state leads to where we can transition to on-demand. It’s probably not likely that we will want to transition from anywhere to the Exploding state.

If you were to run your game right now, the plane would be animated as if it were flying. It will not explode and it will not disappear. It will only fly forever.

We have our possible animations and we have a state controller defined. Now we need to trigger state events from a C# script.

Create a Plane.cs script within the Scripts directory. This script should be added as a component on the game object that is representing our plane. By default the script should look like the following:

Since collisions and other realistic events are out of the scope of this particular example, we’re going to change the animation based on a timer. However, you can easily change things based on your needs.

Within the Plane.cs file, change it to look like the following:

In the Start method we start a coroutine. In that coroutine we wait for three seconds before setting the trigger that transitions from the Flying animation to our Exploding animation. Since we don’t want to explode forever, we configure the game object to be destroyed after ninety seconds.

Give it a try! The plane should fly for a few seconds and then explode. Finally the plane and explosion should disappear because the game object was destroyed.

This tutorial went over a few different topics that brought us to animating a spritesheet. The goal was to take a single image spritesheet that contained several sprite images and animate them as frames. We took that spritesheet, parsed it in Unity, defined two different animations, and then controlled those animations with an animator and a script with logic.

Spritesheets can be optimized beyond what we saw in this tutorial and they can contain more sprites than what we used. However, spritesheets should definitely be used and they are quite easy to animate since most of what we did was point and click with configurations in Unity.

This tutorial was based on an example I had done with Phaser titled, Animate Spritesheets in a Phaser Game.