Designing a Strategy to Develop a Game with Unity and MongoDB

When it comes to game development, you should probably have some ideas written down before you start writing code or generating assets. The same could probably be said about any kind of development, unless of course you’re just messing around and learning something new.

So what should be planned before developing your next game?

Depending on the type of game, you’re probably going to want a playable frontend, otherwise known as the game itself, some kind of backend if you want an online component such as multiplayer, leaderboards, or similar, and then possibly a web-based dashboard to get information at a glance if you’re on the operational side of the game and not a player.

Adrienne Tacke, Karen Huaulme, and myself (Nic Raboy) are in the process of building a game. We think Fall Guys: Ultimate Knockout is a very well-made game and thought it’d be interesting to create a tribute game that is a little more on the retro side, but with a lot of the same features. The game will be titled, Plummeting People. This article explores the planning, design, and development process!

Take a look at the Jamboard we’ve created so far:

The above Jamboard was created during a planning stream on Twitch where the community participated. The content that follows is a summary of each of the topics discussed and helpful information towards planning the development of a game.

Planning the Game Experience with a Playable Frontend

The game is what most will see and what most will ever care about. It should act as the driver to every other component that operates behind the scenes.

Rather than try to invade the space of an already great game that we enjoy (Fall Guys), we wanted to put our own spin on things by making it 2D rather than 3D. With Fall Guys being the basic idea behind what we wanted to accomplish, we needed to further break down what the game would need. We came to a few conclusions.

We need a few arenas to be able to call it a game worth playing, but we didn’t want it to be as thought out as the game that inspired our idea. At the end of the day, we wanted to focus more on the development journey than making a blockbuster hit.

Fall Guys, while considered a battle royale, is still a racing game at its core. So what kind of arenas would make sense in a 2D setting? 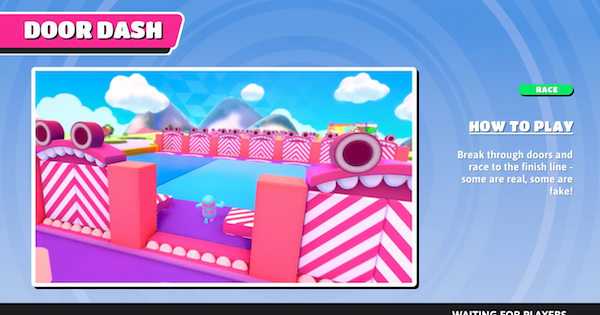 Our plan is to start with the simplest level concepts to save us from complicated game physics and engineering. There are two levels in particular that have basic collisions as the emphasis in Fall Guys. These levels include “Door Dash” and “Tip Toe” which focus on fake doors and disappearing floor tiles. Both of which have no rotational physics and nothing beyond basic collisions and randomization. 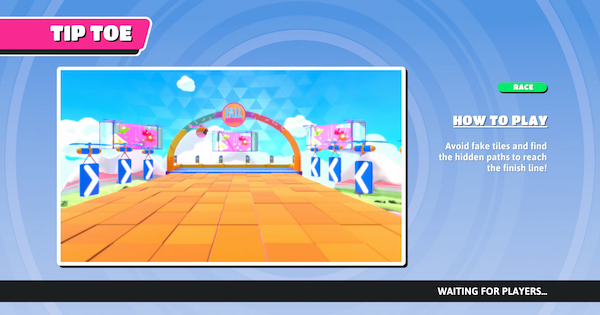 While we could just stick with two basic levels as our proof of concept, we have a goal for a team arena such as scoring goals at soccer (football).

The arena concepts are important, but in order to execute, game assets will be necessary.

We’re considering the following game assets a necessary part of our game:

To maintain the spirit of the modern battle royale game, we thought player customizations were a necessary component. This means we’ll need customized sprites with different outfits that can be unlocked throughout the gameplay experience.

Level design and game assets are only part of a game. They are quite meaningless unless paired with the user interaction component. The user needs to be able to control the player, interact with other players, and interact with obstacles in the arena. For this we’ll need to create our own gameplay logic using the assets that we create.

Maintaining an Online, Multiplayer Experience with a Data Driven Backend

We envision the bulk of our work around this tribute game will be on the backend. Moving around on the screen and interacting with obstacles is not too difficult of a task as demonstrated in a previous tutorial that I wrote.

Instead, the online experience will require most of our attention. Our first round of planning came to the following conclusions:

When the player does anything in the game, it needs to be processed by the server and broadcasted to other players in the game. This needs to be real-time and sockets is probably the only logical solution to this. If the server is managing the sockets, data can be stored in the database about the players, and the server can also validate interactions to prevent cheating.

When the game is live, there will be simultaneous games in operation, each with their own set of players. We’ll need to come up with a matchmaking solution so that players can only be added to a game that is accepting players and these players must fit certain criteria.

The matchmaking process might serve as a perfect opportunity to use aggregation pipelines within MongoDB. For example, let’s say that you have 5 wins and 1000 losses. You’re not a very good player, so you probably shouldn’t end up in a match with a player that has 1000 wins and 5 losses. These are things that we can plan for from a database level.

User profile stores are one of the most common components for any online game. These store information about the player such as the name and billing information for the player as well as gaming statistics. Just imagine that everything you do in a game will end up in a record for your player.

So what might we store in a user profile store? What about the following?:

The user profile store will have to be carefully planned because it is the baseline for anything data related in the game. It will affect the matchmaking process, leaderboards, historical data, and so much more.

To get an idea of what we’re putting into the user profile store, check out a recorded Twitch stream we did on the topic.

Since this is a competitive game, it makes sense to have a leaderboard. However this leaderboard can be a little more complicated than just your name and your experience points. What if we wanted to track who has the most wins, losses, steps, play time, etc.? What if we wanted to break it down further to see who was the leader in North America, Europe, or Asia? We could use MongoDB geospatial queries around the location of players.

As long as we’re collecting game data for each player, we can come up with some interesting leaderboard ideas.

We know we’re going to want to track wins and losses for each player, but we might want to track more. For example, maybe we want to track how many steps a player took in a particular arena, or how many times they fell. This information could be later passed through an aggregation pipeline in MongoDB to determine a rank or level which could be useful for matchmaking and leaderboards.

Would it be an online multiplayer game without some kind of chat? We were thinking that while a player was in matchmaking, they could chat with each other until the game started. This chat data would be stored in MongoDB and we could implement Atlas Search functionality to look for signs of abuse, foul language, etc., that might appear throughout the chat.

Generating Reports and Logical Metrics with an Admin Dashboard

For this, we’re probably going to want to create dashboards, reports, and other useful tools to work with our data on a regular basis. Here are some things that we were thinking about doing:

If everything has been running smooth with the game and the data-collection of the backend, we’ve got data, so we just need to visualize it. MongoDB Atlas Charts can take that data and help us make sense of it. Maybe we want to show a heatmap at different hours of the day for different regions around the world, or maybe we want to show a bar graph around player experience points. Whatever the reason may be, Atlas Charts would make sense in an admin dashboard setting.

Depending on the popularity of the game, data will be coming into MongoDB like a firehose. To help with scaling and pricing, it will make sense to offload historical data from our cluster to a cloud object storage in order to save on costs and improve our cluster’s performance by removing historical data.

In MongoDB Atlas, the best way to do this is to enable Online Archive which allows you to set rules to automatically archive your data to a fully-managed cloud storage while retaining access to query that data.

You can also leverage MongoDB Atlas Data Lake to connect your own S3 buckets and run Federated Queries to access your entire data set using MQL and the Aggregation Framework.

Like previously mentioned, this article is a starting point for a series of articles that are coming from Adrienne Tacke, Karen Huaulme, and myself (Nic Raboy), around a Fall Guys tribute game that we’re calling Plummeting People. Are we trying to compete with Fall Guys? Absolutely not! We’re trying to show the thought process around designing and developing a game that leverages MongoDB and since Fall Guys is such an awesome game, we wanted to pay tribute to it.

The next article in the series will be around designing and developing the user profile store for the game. It will cover the data model, queries, and some backend server code for managing the future interactions between the game and the server.

Want to discuss this planning article or the Twitch stream that went with it? Join us in the community thread that we created.