Getting Started with Unity for Creating a 2D Game

If you’ve been keeping up with the content on the MongoDB Developer Portal, you’ll know that a few of us at MongoDB (Nic Raboy, Adrienne Tacke, Karen Huaulme) have been working on a game titled Plummeting People, a Fall Guys: Ultimate Knockout tribute game. Up until now we’ve focused on game planning and part of our backend infrastructure with a user profile store.

As part of the natural progression in our development of the game and part of this tutorial series, it makes sense to get started with the actual gaming aspect, and that means diving into Unity, our game development framework.

In this tutorial, we’re going to get familiar with some of the basics behind Unity and get a sprite moving on the screen as well as handing collision. If you’re looking for how we plan to integrate the game into MongoDB, that’s going to be saved for another tutorial.

An example of what we want to accomplish can be seen in the following animated image:

The framerate in the image is a little stuttery, but the actual result is quite smooth.

Before we get started, it’s important to understand the requirements for creating the game.

I’m using Unity 2020.1.6f1, but any version around this particular version should be fine. You can download Unity at no cost for macOS and Windows, but make sure you understand the licensing model if you plan to sell your game.

Since the goal of this tutorial is around moving a game object and handling collisions with another game object, we’re going to need images. I’m using a 1x1 pixel image for my player, obstacle, and background, all scaled differently within Unity, but you can use whatever images you want.

Creating a New Unity Project with Texture and Script Assets

To keep things easy to understand, we’re going to start with a fresh project. Within the Unity Hub application that becomes available after installing Unity, choose to create a new project. 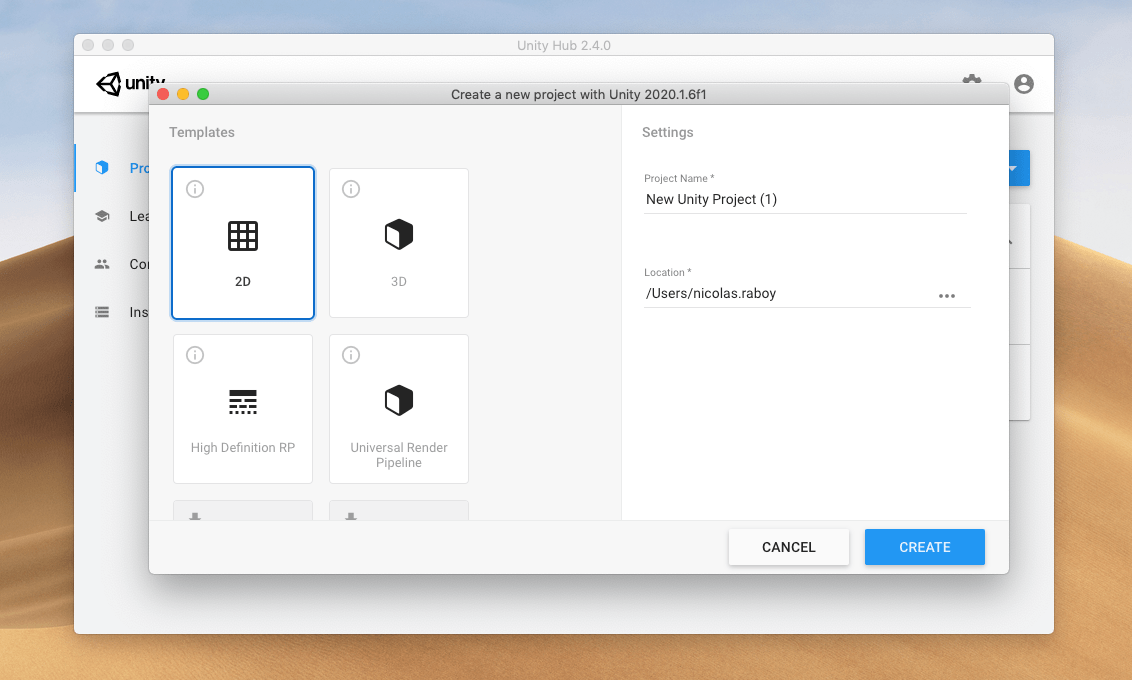 You’ll want to choose 2D from the available templates, but the name and project location doesn’t matter as long as you’re comfortable with it.

The project might take a while to generate, but when it’s done, you should be presented with something that looks like the following: 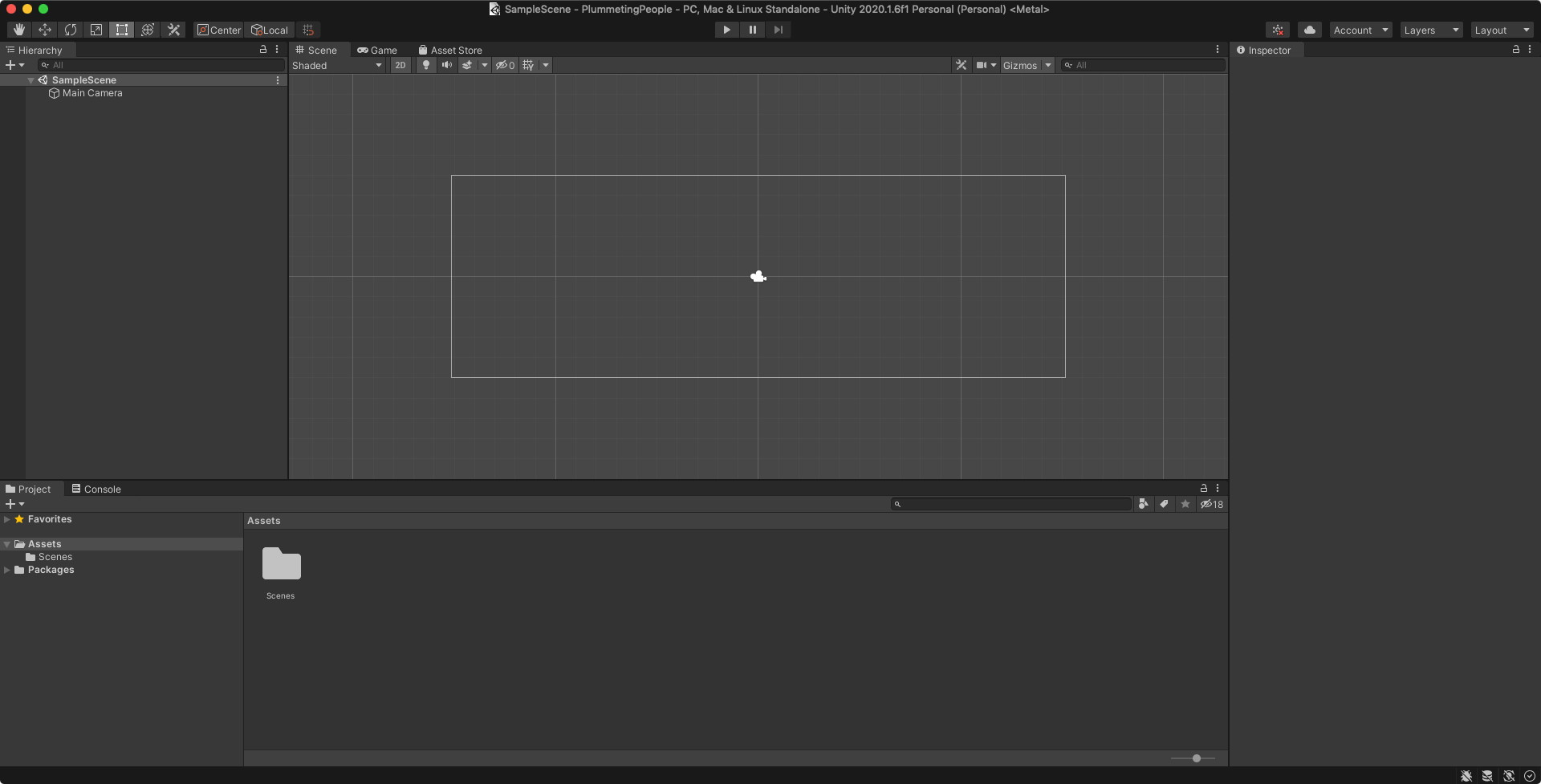 As part of the first steps, we need to make the project a little more development ready. Within the Project tree, right click on Assets and choose to create a new folder for Textures as well as Scripts. 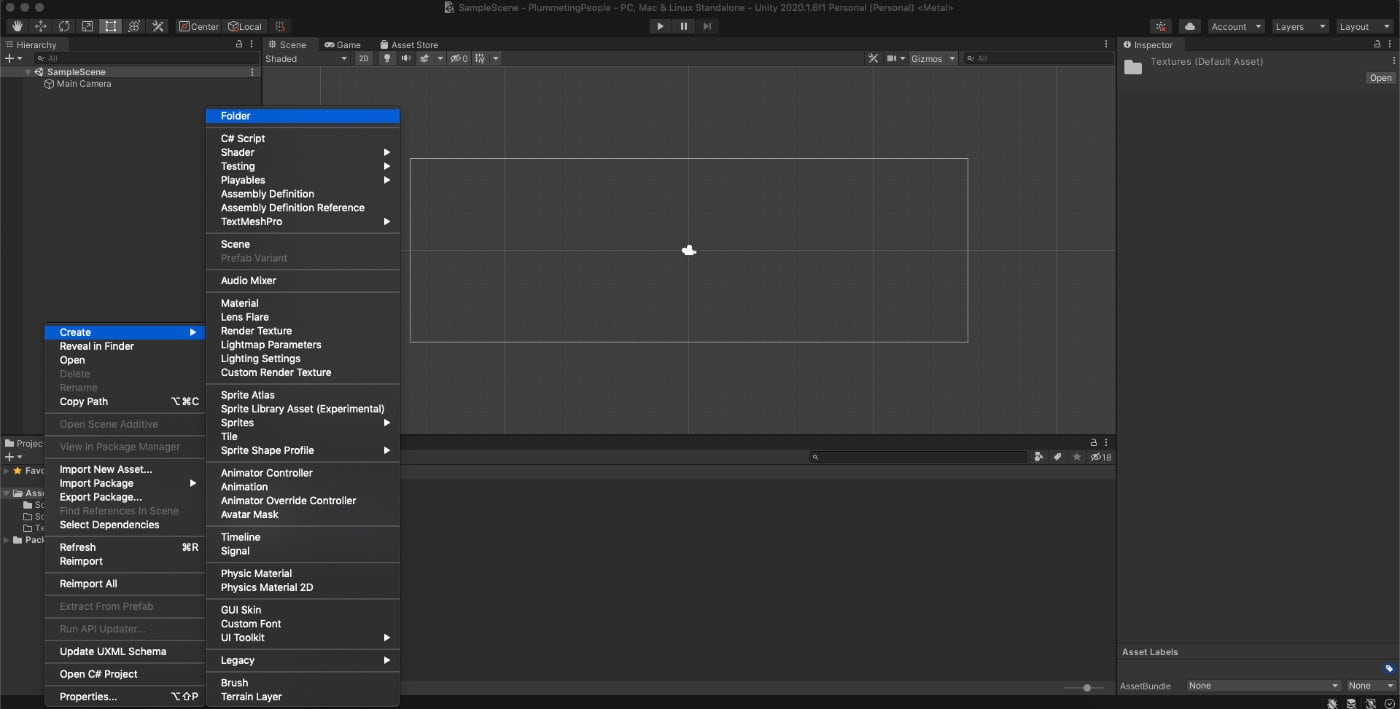 As of right now there is a single scene for the game titled SampleScene. The name for this scene doesn’t properly represent what the scene will be responsible for. Instead, let’s rename it to GameScene as it will be used for the main gaming component for our project. A scene for a game is similar to a scene in a television show or movie. You’ll likely have more than one scene, but each scene is responsible for something distinct. For example, in a game you might have a scene for the menu that appears when the user starts the game, a scene for game-play, and a scene for what happens when they’ve gotten game over. The use cases are limitless.

With the scene named appropriately, it’s time to add game objects for the player, background, and obstacle. Within the project hierarchy panel, right click underneath the Main Camera item (if your hierarchy is expanded) or just under GameScene (if not expanded) and choose Create Empty from the list. 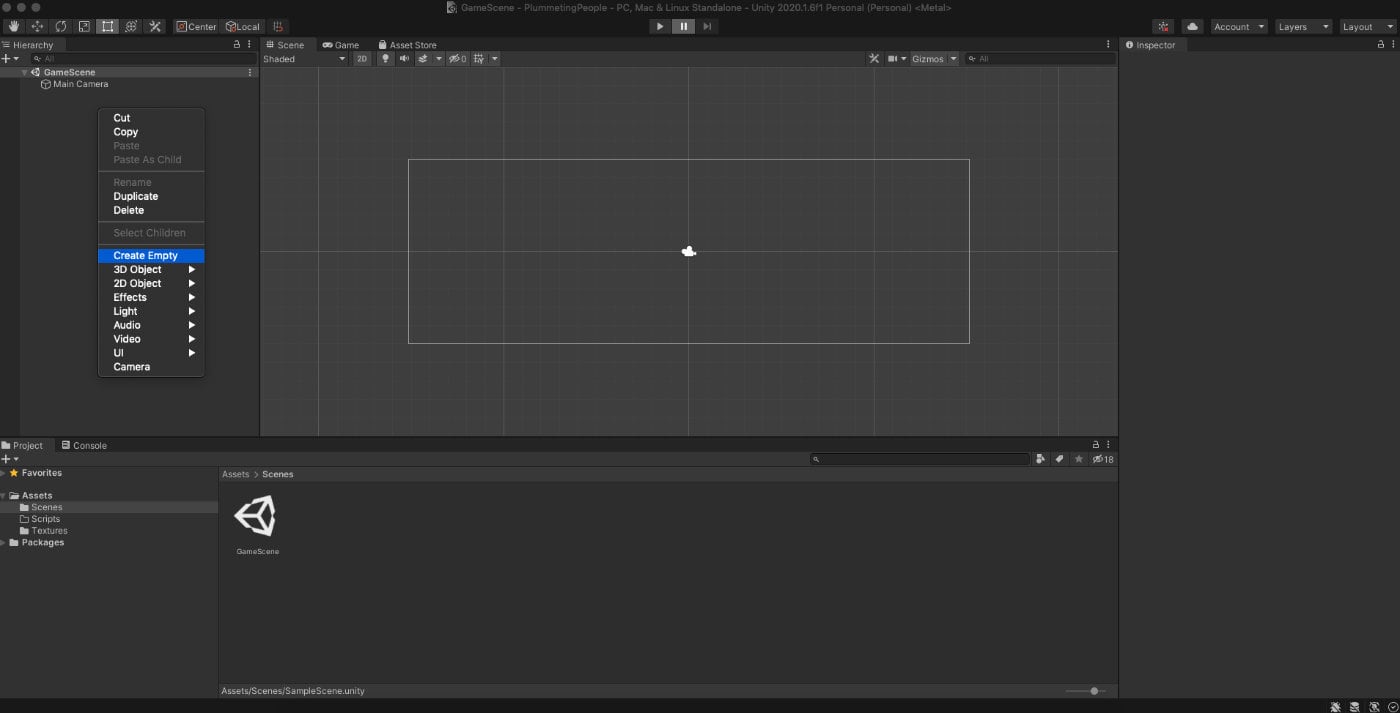 We’ll want to create a game object for each of the following: the player, background, and obstacle. The name isn’t too important, but it’s probably a good idea to give them names based around their purpose.

To summarize what we’ve done, double-check the following:

At this point in time we have the project properly laid out.

We have our game objects and assets ready to go and are now ready to configure them. This means adding images to the game object, physics properties, and any collision related data.

With the player game object selected from the project hierarchy, choose Add Component and search for Sprite Renderer. 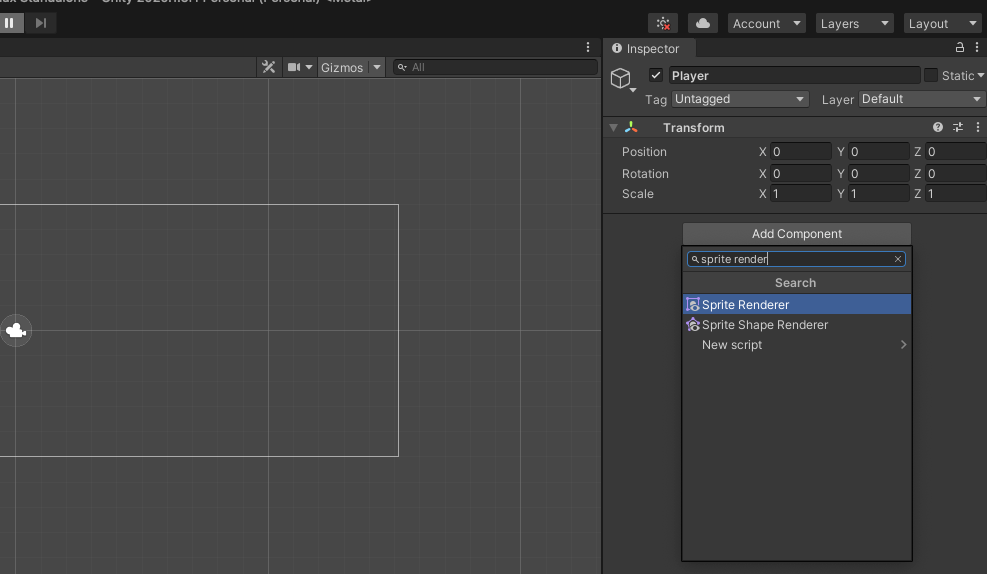 The Sprite Renderer allows us to associate an image to our game object. Click the circle icon next to the Sprite property’s input box. A panel will pop up that allows you to select the image you want to associate to the selected game object. You’re going to want to use the image that you’ve added to the Textures directory. Follow the same steps for the obstacle and the background.

You may or may not notice that the layering of your sprites with images are not correct in the sense that some images are in the background and some are in the foreground. To fix the layering, we need to add a Sorting Layer to the game objects.

Rather than using the default sorting layer, choose to Add Sorting Layer… so we can use our own strategy. Create two new layers titled Background and GameObject and make sure that Background sits above GameObject in the list. The list represents the rendering order so higher in the list gets rendered first and lower in the list gets rendered last. This means that the items rendering last appear at the highest level of the foreground. Think about it as layers in Adobe Photoshop, only reversed in terms of which layers are most visible.

With the sorting layers defined, set the correct Sorting Layer for each of the game objects in the scene.

The next step is to add physics and collision box data to the game objects that should have such data. Select the player game object and search for a Rigidbody 2D component.

In addition to a rigid body, the player will also need a collision box. Add a new Box Collider 2D component to the player game object.

The Box Collider 2D component should be added to the obstacle as well. The background, since it has no interaction with the player or obstacle does not need any additional component added to it.

The final configuration for the game objects is the adding of the scripts for game logic.

Right click on the Scripts directory and choose to create a new C# Script. You’ll want to rename the script to something that represents the game object that it will be a part of. For this particular script, it will be associated to the player game object. 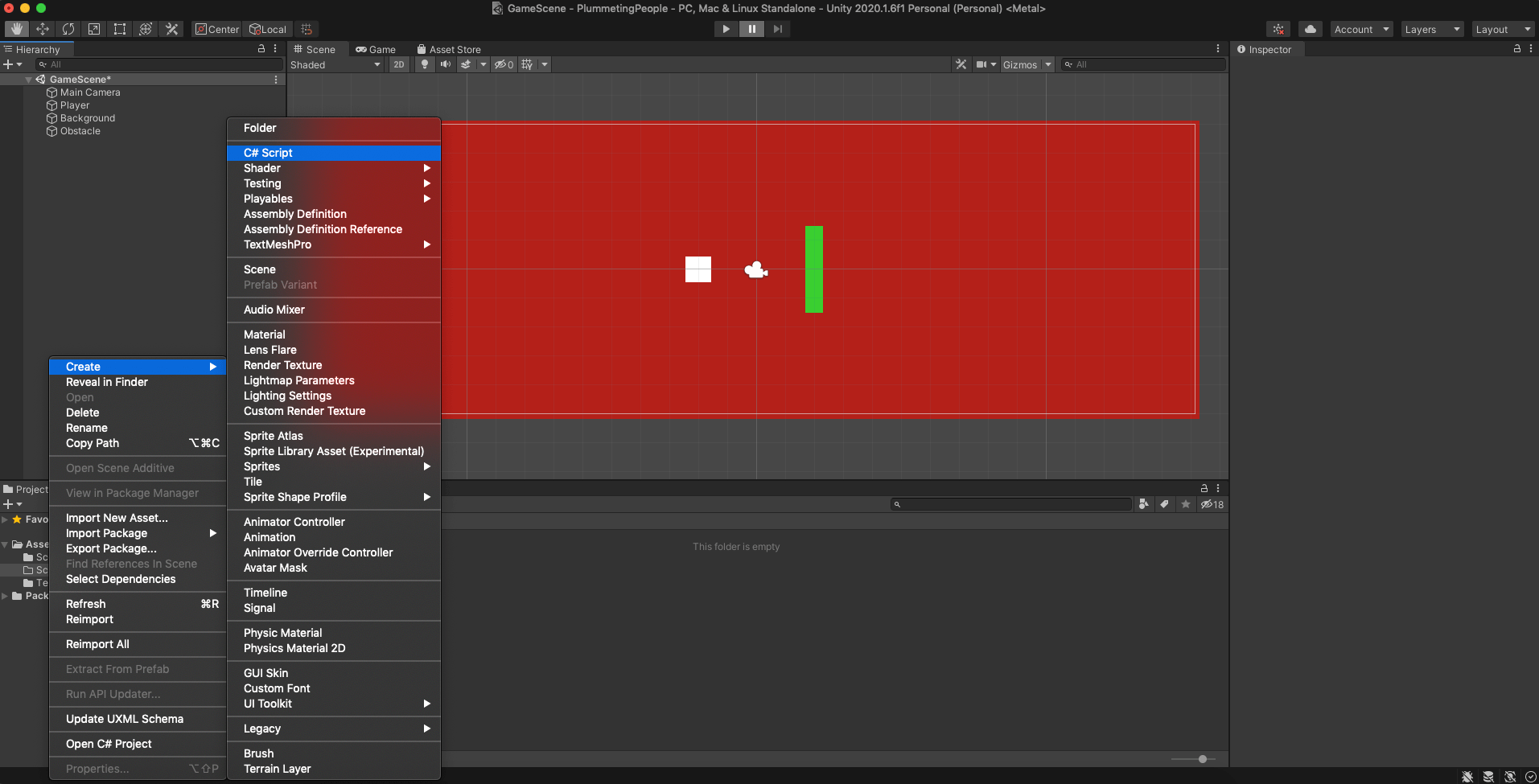 At this point in time everything for this particular game is configured. However, before we move onto the next step, let’s confirm the components added to each of the game objects in the scene.

The next step is to apply some game logic.

Controlling a Game Object with a Unity C# Script

In this particular game example, we’re only going to add logic to the player object script.

The script should already be associated to a player object, so open the script file and you should see the following code:

Because we do have physics, let’s look at the latter two options, starting with the movement through force.

Within your C# script, change your code to the following:

When any of the directional keys are pressed (not arrow keys), force is applied to the rigid body in a certain direction at a certain speed. If you ran the game and tried to move the player, you’d notice that it moves with a kind of sliding on ice effect. Rather than moving the player at a constant speed, the player increases speed as it builds up momentum and then when you release the movement keys it gradually slows down. This is because of the physics and the applying of force.

Moving the player into the obstacle will result in the player stopping. We didn’t even need to add any code to make this possible.

So let’s look at moving the player without applying force. Change the FixedUpdate function to the following:

Instead of using the AddForce method we are using the MovePosition method. We are now translating our rigid body which will also translate our game object position. We have to use the fixedDeltaTime, otherwise we risk our translations happening too quickly if the FixedUpdate is executed too quickly.

If you run the game, you shouldn’t get the moving on ice effect, but instead nice smooth movement that stops as soon as you let go of the keys.

In both examples, the movement was limited to the letter keys on the keyboard.

If you want to move based on the typical WASD letter keys and the arrow keys, you could do something like this instead:

The above code will generate a value of -1.0, 0.0, or 1.0 depending on if the corresponding letter key or arrow key was pressed.

Just like with the AddForce method, when using the MovePosition method, the collisions between the player and the obstacle still happen.

You just saw how to get started with Unity and building a simple 2D game. Of course what we saw in this tutorial wasn’t an actual game, but it has all of the components that can be applied towards a real game. This was discussed by Karen Huaulme and myself (Nic Raboy) in the fourth part of our game development Twitch stream.

The player movement and collisions will be useful in the Plummeting People game as players will not only need to dodge other players, but obstacles as well as they race to the finish line.