Designing and Developing 2D Game Levels with Unity and C#

If you’ve been keeping up with the game development series that me (Nic Raboy) and Adrienne Tacke have been creating, you’ve probably seen how to create a user profile store for a game and move a player around on the screen with Unity.

To continue with the series, which is also being streamed on Twitch, we’re at a point where we need to worry about designing a level for gameplay rather than just exploring a blank screen.

In this tutorial, we’re going to see how to create a level, which can also be referred to as a map or world, using simple C# and the Unity Tilemap Editor.

To get a better idea of what we plan to accomplish, take a look at the following animated image.

You’ll notice that we’re moving a non-animated sprite around the screen. You might think at first glance that the level is one big image, but it is actually many tiles placed carefully within Unity. The edge tiles have collision boundaries to prevent the player from moving off the screen.

If you’re looking at the above animated image and wondering where MongoDB fits into this, the short answer is that it doesn’t. The game that Adrienne and I are building will leverage MongoDB, but some parts of the game development process such as level design won’t need a database. We’re attempting to tell a story with this series.

There are many ways to create a level for a game, but as previously mentioned, we’re going to be using tilemaps. Unity makes this easy for us because the software provides a paint-like experience where we can draw tiles on the canvas using any available images that we load into the project.

For this example, we’re going to use the following texture sheet:

Rather than creating a new project and repeating previously explained steps, we’re going to continue where we left off from the previous tutorial. The doordash-level.png file should be placed in the Assets/Textures directory of the project.

While we won’t be exploring animations in this particular tutorial, if you want the spritesheet used in the animated image, you can download it below:

The plummie.png file should be added to the project’s Assets/Textures directory. To learn how to animate the spritesheet, take a look at a previous tutorial I wrote on the topic.

Inside the Unity editor, click on the doordash-level.png file that was added. We’re going to want to do a few things before we can work with each tile as independent images. 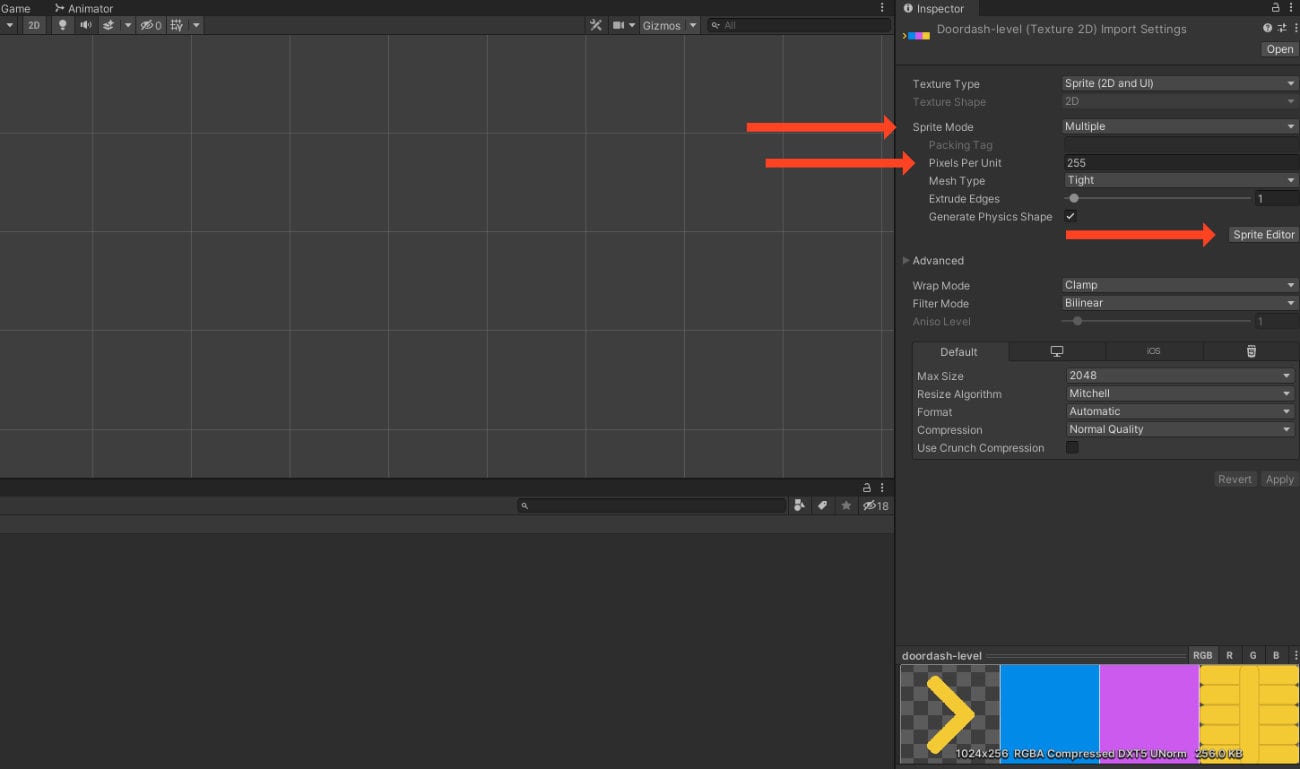 In the above image, you might notice that the Pixels Per Unit value is 255 while the actual tiles are 256. By defining the tiles as one pixel smaller, we’re attempting to remove any border between the tile images that might make the level look weird due to padding.

When using the Sprite Editor, make sure to slice the image by the cell size using the correct width and height dimensions of the tiles. For clarity, the tiles that I attached are 256x256 in resolution. 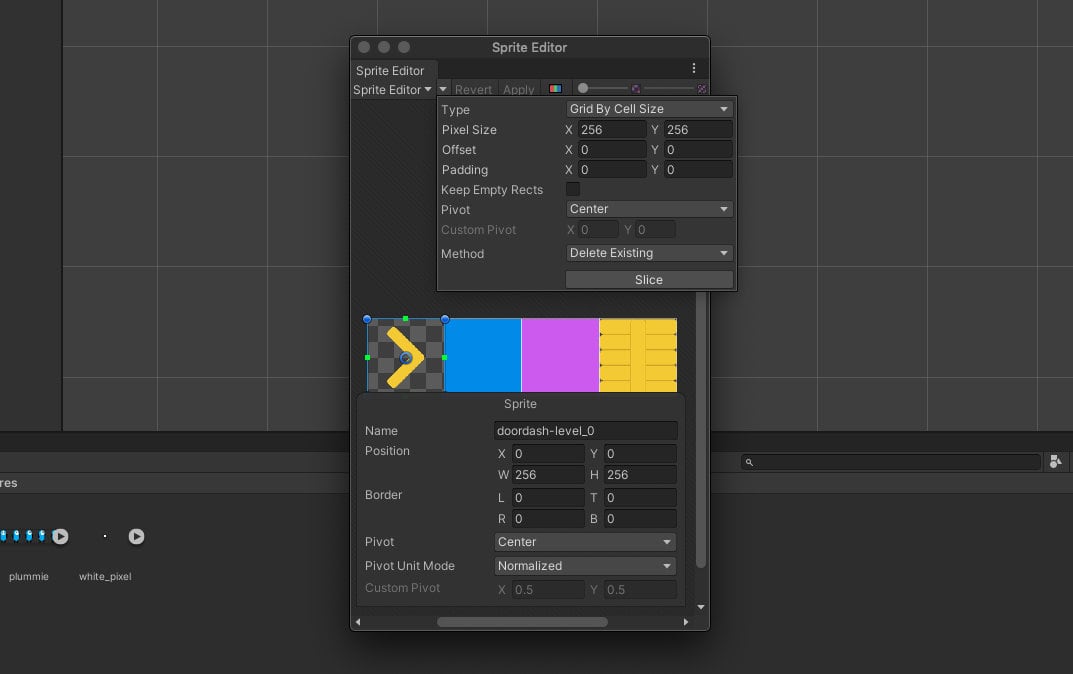 If you plan to use the spritesheet for the Plummie character, make sure to repeat the same steps for that spritesheet as well. It is important we have access to the individual images in a spritesheet rather than treating all the images as one single image.

With the images ready for use, let’s focus on drawing the level.

Within the Unity menu, choose Component -> Tilemap -> Tilemap to add a new tilemap and parent grid object to the scene. To get the best results, we’re going to want to layer multiple tilemaps on our scene. Right click on the Grid object in the scene and choose 2D Object -> Tilemap. You’ll want three tilemaps in total for this particular example. 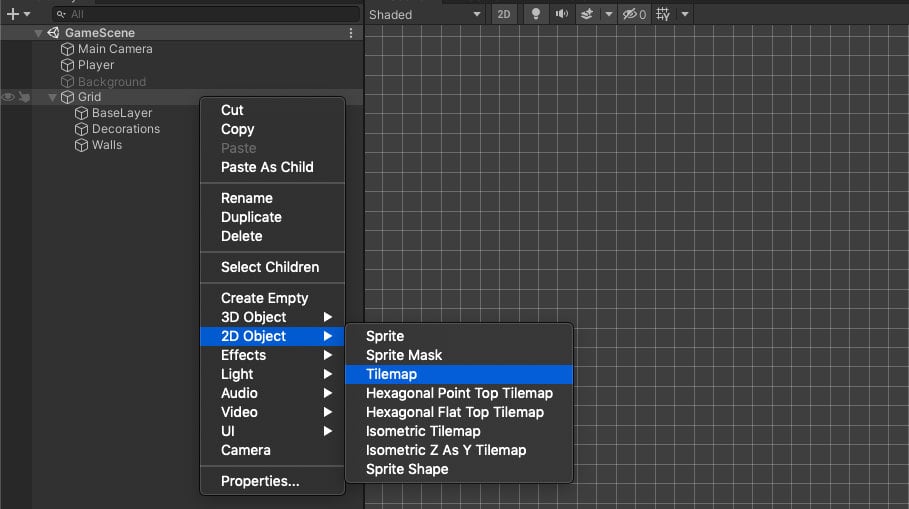 To make sure the layers get rendered in the correct order, the Tilemap Renderer for each tilemap should have a properly defined Sorting Layer. If continuing from the previous tutorial, you’ll remember we had created a Background layer and a GameObject layer. These can be used, or you can continue to create and assign more. Just remember that the render order of the sorting layers is top to bottom, the opposite of what you’d experience in photo editing software like Adobe Photoshop.

The next step is to open the Tile Palette window within Unity. From the menu, choose Window -> 2D -> Tile Palette. The palette will be empty to start, but you’ll want to drag your images either one at a time or multiple at a time into the window.

With images in the tile palette, they can be drawn on the scene like painting on a canvas. First click on the tile image you want to use and then choose the painting tool you want to use. You can paint on a tile-by-tile basis or paint multiple tiles at a time.

It is important that you have the proper Active Tilemap selected when drawing your tiles. This is important because of the order that each tile renders and any collision boundaries we add later.

Take a look at the following possible result: 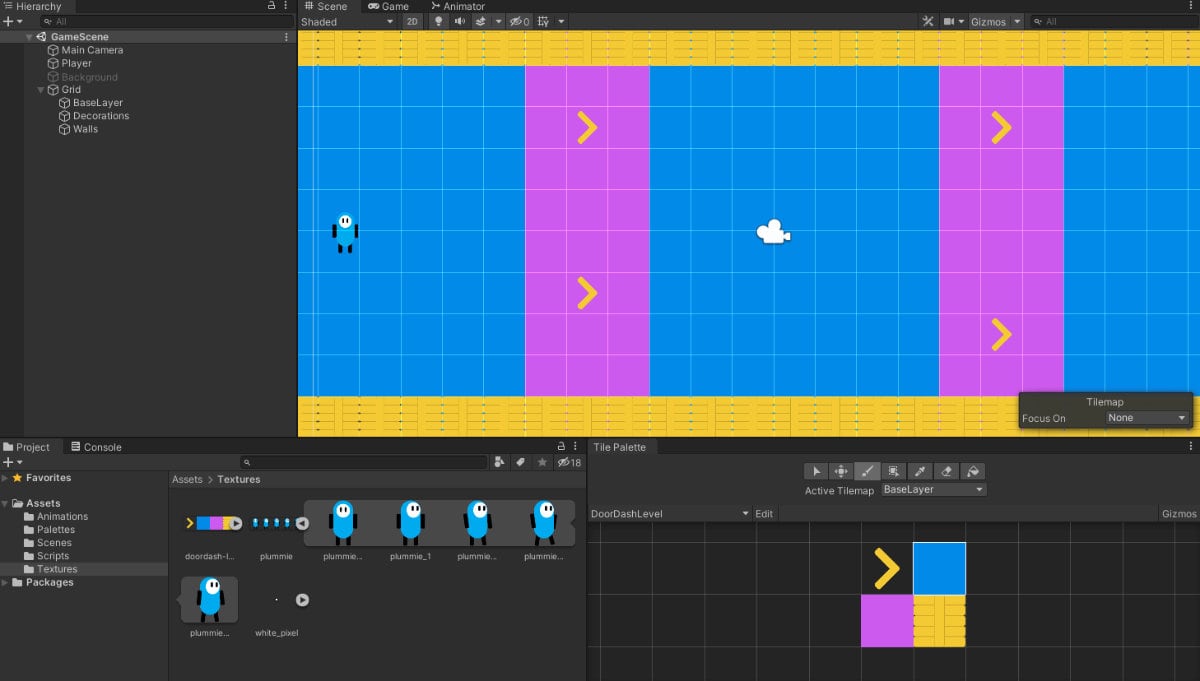 Remember, we’re designing a level, so this means that your tiles can exceed the view of the camera. Use your tiles to make your level as big and extravagant as you’d like.

Assuming we kept the same logic from the previous tutorial, Getting Started with Unity for Creating a 2D Game, we can move our player around in the level, but the player can exceed the screen. The player may still be a white box or the Plummie sprite depending on what you’ve chosen to do. Regardless, we want to make sure our layer that represents the boundaries acts as a boundary with collision.

Adding Collision Boundaries to Specific Tiles and Regions on a Level

Adding collision boundaries to tiles in a tilemap is quite easy and doesn’t require more than a few clicks.

Select the tilemap that represents our walls or boundaries and choose to Add Component in the inspector. You’ll want to add both a Tilemap Collider 2D as well as a Rigidbody 2D. The Body Type of the Rigidbody 2D should be static so that gravity and other physics-related events are not applied.

After doing these short steps, the player should no longer be able to go beyond the tiles for this layer.

We can improve things!

Right now, every tile that is part of our tilemap with the Tilemap Collider 2D and Rigidbody 2D component has a full collision area around the tile. This is true even if the tiles are adjacent and parts of the tile can never be reached by the player. Imagine having four tiles creating a large square. Of the possible 16 collision regions, only eight can ever be interacted with. We’re going to change this, which will greatly improve performance. 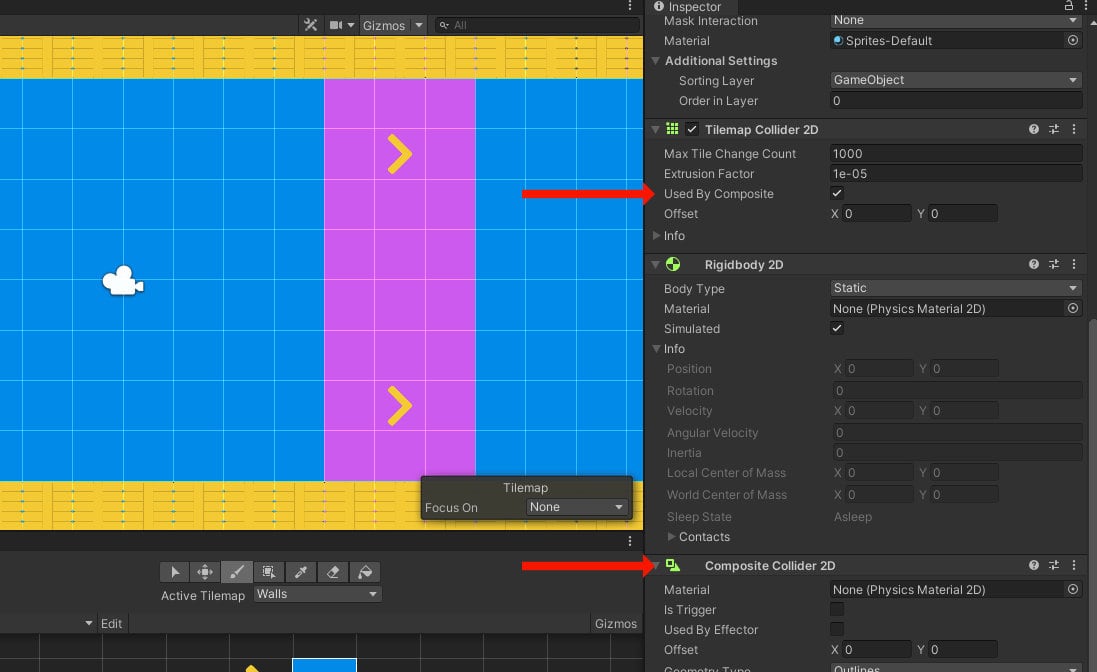 Just like that, there are fewer regions that are tracking collisions, which will boost performance.

As of right now, we have our player, which might be a Plummie or might be a white pixel, and we have our carefully crafted level made from tiles. The problem is that our camera can only fit so much into view, which probably isn’t the full scope of our level.

What we can do as part of the gameplay experience is have the camera follow the player as it traverses the level. We can do this with C#.

Select the Main Camera within the current scene. We’re going to want to add a new script component.

Within the C# script that you’ll need to attach, include the following code:

In the above code, we are looking at the transform of another unrelated game object. We’ll attach that game object in just a moment. Every time the frame updates, the position of the camera is updated to match the position of the player in the x-axis. In this example, we are fixing the y-axis and z-axis so we are only following the player in the left and right direction. Depending on how you’ve created your level, this might need to change.

Remember, this script should be attached to the Main Camera or whatever your camera is for the scene.

Remember the player variable in the script? You’ll find it in the inspector for the camera. Drag your player object from the project hierarchy into this field and that will be the object that is followed by the camera.

Running the game will result in the camera being centered on the player. As the player moves through the tilemap level, so will the camera. If the player tries to collide with any of the tiles that have collision boundaries, motion will stop.

You just saw how to create a 2D world in Unity using tile images and the Unity Tilemap Editor. This is a very powerful tool because you don’t have to create massive images to represent worlds and you don’t have to worry about creating worlds with massive amounts of game objects.

The assets we used in this tutorial are based around a series that myself (Nic Raboy) and Adrienne Tacke are building titled Plummeting People. This series is on the topic of building a multiplayer game with Unity that leverages MongoDB. While this particular tutorial didn’t include MongoDB, plenty of other tutorials in the series will.

If you feel like this tutorial skipped a few steps, it did. I encourage you to read through some of the previous tutorials in the series to catch up.

If you want to build Plummeting People with us, follow us on Twitch where we work toward building it live, every other week.